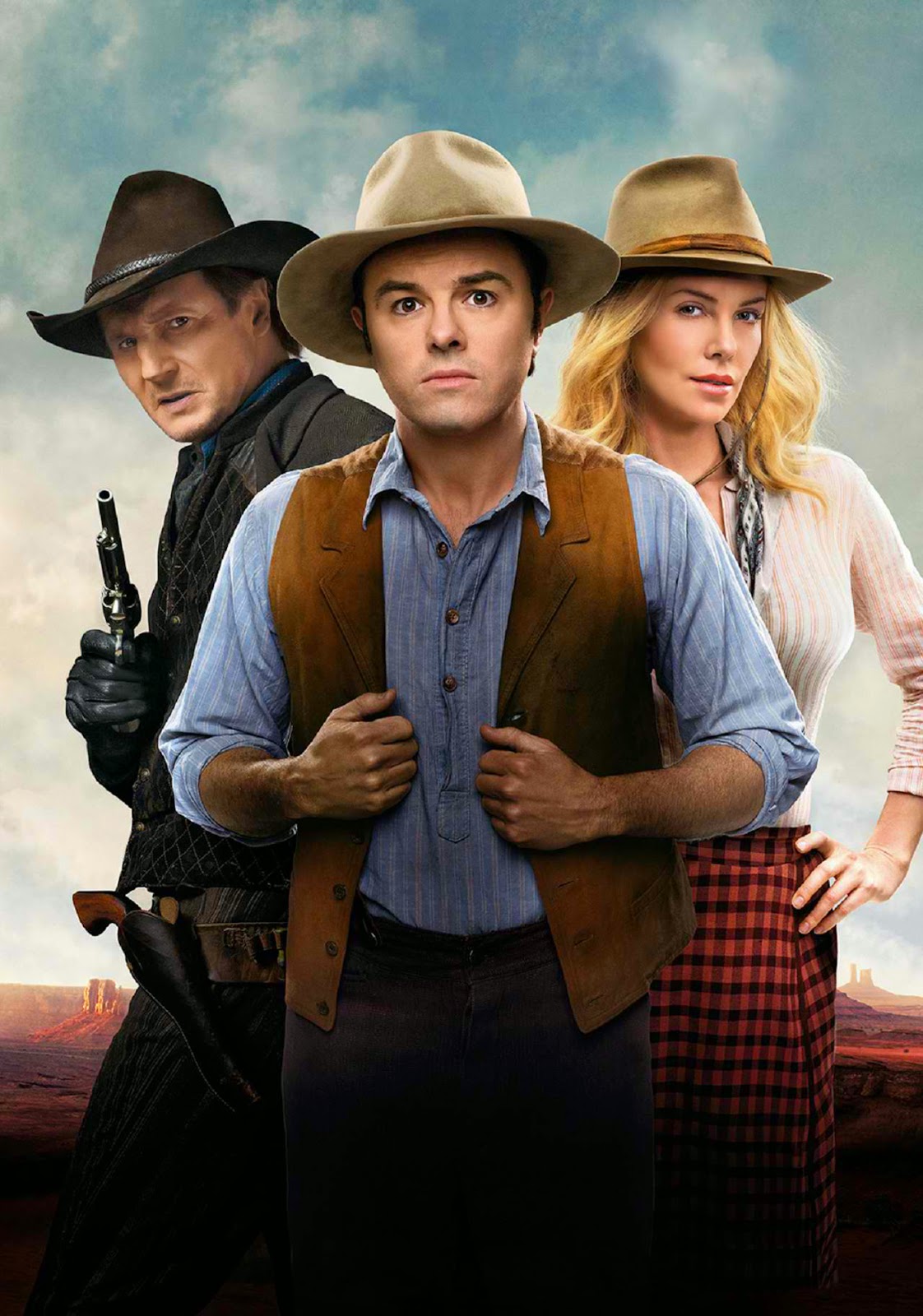 Seth McFarlane (“Ted,” TV's “Family Guy”) once again stretches the boundaries of comedy and propriety as writer, producer, director of and actor in “A Million Ways to Die in the West.” He tells the tale and plays the lead in the story of Albert Stark, a soft man in hard times who is trying to figure out how to escape this godforsaken frontier that seems to be trying to kill him—and everyone else in it—at every turn. A sheep farmer whose fickle girlfriend, Louise (Amanda Seyfried), leaves him when he backs out of a gunfight, Albert feels like a chump.


Adding to Albert's distress and feelings of inadequacy, Louise takes up with the town's most successful businessman, arrogant moustachery owner Foy (Neil Patrick Harris). And what Albert can't dream of offering in terms of financial stability and facial hirsuteness, Foy has in spades.

But when a mysterious and beautiful gunslinger named Anna (Charlize Theron) rides into town, she helps Albert begin to find his courage and they start to fall in unexpected love.

Nothing comes easy in the bitterly unforgiving Old West, and further trouble ensues when Anna's husband, Clinch Leatherwood (Liam Neeson)—a notorious outlaw whose name strikes fear into the hearts of the citizenry— arrives seeking revenge on the man whom he thinks has made a dishonest woman of Anna. Reluctantly, Albert must now put his newfound courage to the test in a one-man-left-standing gunfight that will earn him Anna's hand and long-denied respect in the Wild West...or another unmarked grave forgotten in the annals of history.
Joining Albert in his quest are his best friend, Edward (Giovanni Ribisi), the unfailingly nice and extraordinarily naive town shoe repairman, and Ruth (Sarah Silverman), Edward's girlfriend who is just as chaste with him as she is whorish with her brothel clients.

Directed by MacFarlane from a screenplay that he wrote with Alec Sulkin & Wellesley Wild, “A Million Ways to Die in the West” also co-stars a comedic lineup of MacFarlane favorites including Ralph Garman as Dan, one of the more colorful Old Stump locals, and Alex Borstein as Millie, the madam of the whorehouse who can't quite put her finger on her best employee's oddly chaste relationship with Edward.

Christopher Hagen and Jean Effrion come aboard the production as Albert's grizzled parents, George and Elsie, who are similarly trying to avoid getting killed for merely existing in this day and age. Evan Jones portrays Lewis, a particularly vile member of Clinch's gang.

“A Million Ways to Die in the West” is distributed by United International Pictures through Columbia Pictures.
Posted by Cathie Alhambra