My friend Sago just turn ONE. Let's join Sago in riding the waves and celebrating his anniversary in La Union in Let's Go Surfing. 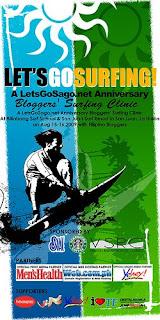 Let's Go Surfing is a charity clinic for bloggers and beginner surfers. It will be held on August 15-16 in La Union at the Billabong Surf School and San Juan Surf Resort in Urbiztondo Beach, San Juan, La Union.

I soo wish i could join this event but i also have an event on August 16 =( Why do i want to join? These prizes awaits!

But wait there's more! You can win the prizes and at the same time enjoy and learn how to surf! The event will host the following:

• A 1hr pre-event orientation on Aug 08 4pm about the activities involved and LetsGoSago.net’s actual 1st Anniversary at Starbucks 6750 (beside Glorietta) Makati (This is strategically set for the 5:30pm bus pick up point for the awarding night of the Top 10 Emerging Influential Blogs).
• A beginner’s surfing clinic for bloggers and non-blogger participants at the Billabong Surf School with Top Philippine Celebrity Surfer Luke Landrigan (Men’s Health Mag May 2009 Cover)
• A food side trip in two popular food spots in San Juan La Union - Halo-Halo de Iloko or Midway Grill (pending developments).
• Program, Raffle and Night beach party at 8:00pm of the 15th.

How do you join? Its so easy! Just follow the these steps!

Both blogger-participants and regular (non-blogger) participants alike are welcome to join. Complete the online registration, pay the corresponding fees, and make sure you are physically fit.

For blogger participants, from the original cost of P2500, cost is now down to P2000 with the support of our sponsors. Furthermore, P600 of that would go to WWF Philippines as a donation to support their projects and operations. You can do this by simply making a blog post (Multiply.com not valid) about the event and mentioning Bico Australia and SM as event sponsors. Bico Australia should have a link to http://bico.shop-ph.com/. This can be done anytime from now until August 10 11.You would also each receive an acknowledgment letter from WWF-Philippines regarding your donation as an individual.

After payment, email the transaction code of your deposit slip. Keep this and bring the deposit slip on Aug 15 as your proof of payment. The remaining balance of P1000 shall be collected on Aug 15 when you come.

Okay, now im really ingget that i can't join the event! There are actually a lot more than what i blogged here. Wanna find out those things? Visit Sago here and learn more about the event!

Ninoy and Cory's Love Story will continue in heaven 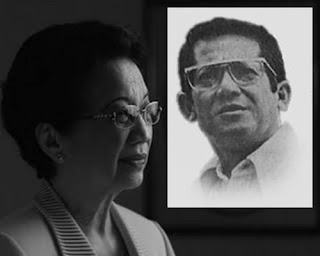 I was up late last night watching the Cory tribute on television. The news was all over the world, even the leaders of other countries gave their own message of sympathy and comfort to Tita Cory’s family and remembered her as an advocate of peace, justice and democracy. But what struck me the most on the tribute was the long lost love story of Ninoy to Cory. I cried on some instance, because it was then that it actually realized and dawned on me that former Pres. Corazon Aquino is now gone. I love the poem that Ninoy wrote when he was in jail for their 19th wedding anniversary. His admration for Cory is not only when he was with her but it was always there, with him.
Below is the poem, which was also arranged by Jose Mari Chan.

I loved her first when she was young
Enchanting, brilliant, middle-strung
Vibrant, fragrant, eternally new
Cool, invigorating as the morning dew.

Desperate, she shared, quieted my despairs
Hopeful, she fanned the fires of my hopes
Lavished me with days of bliss and peace,
Endless, perpetual days of fond memories.

She is my hope; I do not wish to realize
Hence my hope; forever green, eternal prize
My life transcending life, my ultimate quest
Dream of my life for whom Ill spare no rest.

I fell in love again
With the same woman the second time
When first she bore her child and mine
The first fruit of our union and our love.

The pains and anguish of motherhood she braved
Loved her children, their love she deservedly craved
Times were she hung on the very brink of death,
Unflinchingly fulfilling her mission to procreate.

In politics I plunged, she was always by my side,
Steadfast, uncomplaining, helping to turn the tide,
Amidst hardship, her rare courage would not relent
She was my secret weapon, the source of my strength.

The world was my concern, our home her domain,
The people mine, the children hers to maintain,
So it was in those eighteen years and a day
Till I was detained, forced in prison to stay.

Suddenly she became our sole support
Wellspring of hope, source of comfort
On her shoulders fell the burden of life
She emerged our captain in the sea of strife.

I fell in love again
With the same woman the third time
Looming from the battle, undaunted, unafraid,
Calm composed, she is God's lovely maid.

It has been a year of many disappointments
Endless dark nights, long days of sad lament,
Of grave doubts, frustrations, bitter desolations,
Of privations, untold indignities, humiliations.

Dreams became nightmares; hopes, despair.
Rally to freedoms call, no one will dare.
Future is obscured, life has lost its meaning,
The tunnel is long, were only at the beginning.

Leaders I admired, whose advice I sought
Became fallen idols, their souls were bought,
Their conscience they bartered for soft convenience,
Due to despicable cowardice, theyve lost their patience.

Leaders became dealers, begging for part of the spoils,
Forgetting the value, the essence of the hottest toil,
Paralyzed be fear, they joined the amoral dictator,
Defending, waving the bloody flag of the new oppressor.

The pillars of society became the props of tyranny,
Be realistic, they urged, if not for safety, for money.
It is useless to resist, the tyrant is too strong,
Yet aware, with their help the tyranny will prolong.

Mother Pilipinas weeps, her noble sons are gone,
Her land of the morning, is now of the setting sun,
Back to her dungeon in chains shes been returned;
For all her sacrifices, this is what she earned.

The night is cold and dark, there are no stars,
Our prisons are full, our souls wrinkled with scars,
Afflicted, persecuted, struck down but not crushed,
How soon will this blight be erased by Allahs brush?

My only escape is to cling to the woman of my dreams
Who gave me a life full of love, a love full of life,
She is my urge to live, my sole motivation to survive,
She taught me not only to dream, but to make dreams alive.

Fight on! She says: Let not the guiltless ghost depart.
Your pains, our people know are caused by a thousand darts,
But be assuaged, remember the Filipino, his story, his past,
Soon, very soon, the tyrant will choke in his greedy power lust!
Posted by Cathie Alhambra 0 comments