Harry Potter and the Half Blood Prince – July 16, 2009
with exclusive IMAX 3D scenes

As Harry Potter begins his 6th year at Hogwarts School of Witchcraft and Wizardry, he discovers an old book marked mysteriously "This book is the property of the Half-Blood Prince" and begins to learn more about Lord Voldemort's dark past.

An underwater look at the diverse coastal regions of Southern Australia, New Guinea and the Indo-Pacific areas and the impact of global warming on the oceans.

An animated retelling of Charles Dickens classic novel about a Victorian-era miser taken on a journey of self-redemption, courtesy of several mysterious Christmas apparitions.

A band of humans are pitted in a battle against a distant planet's indigenous population.

How does IMAX work? 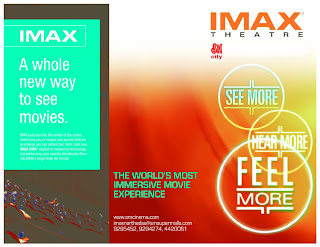 How it works
IMAX’s digital theatre system uses a comprehensive suite of proprietary IMAX technologies, that, when integrated together, creates an experience that consistently puts the audience IN the movie.

IMAX Image Enhancer
IMAX’s proprietary image enhancer brightens the on-screen image, and, through the use of a camera that provides real-time, on-screen feedback, it makes automated adjustments to ensure maximum image fidelity is maintained 100% of the time.

Customized Theatre Geometry
IMAX’s customized theatre geometry maximizes your field of view, putting you IN the movie – and is a key reason why IMAX® 3D is the most immersive cinematic 3D ever created.

IMAX Audio System
IMAX’s powerful audio system delivers laser-aligned digital sound.
IMAX’s Proportional Point Source loudspeaker technology enables listeners to pinpoint the specific location of a sound – with five discrete audio channels. (conventional 5.1 disperses sound through many speakers making it nearly impossible to locate the origin of the sound)
Each IMAX theatre is acoustically treated to present accurate and realistic sound images with the largest dynamic range. This enables the sound to be crisp enough to hear a pin drop and precise enough to know exactly where it dropped.
Each film’s soundtrack is specially mastered for IMAX’s unique sound system.

IMAX Screen
IMAX’s proprietary high-gain screen results in exceptionally bright images and unparalleled 3D
The IMAX screen is slightly curved and sits closer to the audience.
Dual Digital Projectors
IMAX’s revolutionary digital projection technology is “projector agnostic,” meaning that it can utilize commercially available digital technology that best meets IMAX requirements – the projectors are merely a vehicle for IMAX’s proprietary image enhancer, which turbo charges the basic functionality of the light engine.
One of the key benefits of being projector agnostic is that IMAX can adapt and even improve as suppliers develop new technologies.
The current system uses two 2k Christie projectors and has a 1.9:1 aspect ratio – in keeping with the best-tested chip sets – and we continue to work with dual 4k projectors.
IMAX DMR®
All film content that is played through IMAX’s digital projection system is digitally re-mastered with IMAX DMR technology.
IMAX DMR employs a suite of proprietary image enhancement tools that optimize each image for IMAX presentation. Some of the techniques used to enhance the digital image include sharpening, color correction, contrast and digital artifact removal. 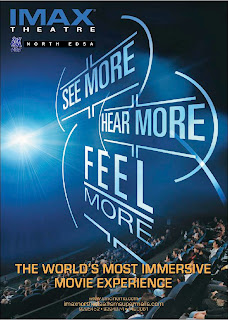 *Twice as many addressable pixels (compared to other DLP Cinema-based systems), which dramatically sharpens images.

*IMAX’s proprietary image enhancer increases brightness, contrast and image fidelity. As the images originate in the form of data, it is essential that they are re-produced into vivid on-screen images that meet IMAX’s high standards.
~More than double the amount of light for 3D when compared to other 3D systems
~Up to double the amount of light for 2D presentations (22ftL) when compared to other systems
~IMAX maintains constant brightness through the entire life of the lamp

*IMAX’s image enhancer is designed to be upgraded as new technologies evolve.

*We extend the bandwidth (data flow) up to 60% to further reduce compression-related visual flaws.

For inquiries and ticket reservations, please call 929- 5452 or 924-4274. For inquiries and screening schedule, log on to www.smcinema.com or you can email us at imaxnorthedsa@smsupermalls.com.

Finally, IMAX is just one bus ride from home Now, all you north people can experience IMAX at the newly renovated SM CITY NORTH EDSA.

SM Cinema offers another breakthrough in movie watching experience. After opening the very first IMAX Theatre in the Philippines at SM Mall of Asia, SM Cinema is once again leading the race towards technological evolution by opening another IMAX Theatre at SM City North EDSA on July 16, 2009.

IMAX Theatre's digital theater system uses a comprehensive suite of proprietary IMAX technologies, that, when integrated together, creates an experience that consistently puts the audience IN the movie.

The IMAX Experience is created through a comprehensive suite of intellectual property and technology, and it is the unique combination of these features that impacts what moviegoers see, hear and feel at the movies.

Virtually everything is customized for the IMAX theatre to maximize the experience for each guest – regardless of where they are sitting.

For inquiries and ticket reservations, please call 929- 5452 or 924-4274. For inquiries and screening schedule, log on to www.smcinema.com or you can email us at imaxnorthedsa@smsupermalls.com.
Posted by Cathie Alhambra 0 comments

Tag me, Baby! Thanks Ria!

~This is the easy way and the fastest way to :
1. Make your Authority Technorati explode.
2. Increase your Google Page Rank.
3. Get more traffic to your blog.
4. Makes more new friends.

1. Picturing of Life
2. Juliana’s Site
3. Hazel-My Life, My Hope, My Future.
4. Jeanne-The Callalily Space
5.My Family is my Life
6. The Simple Life of a Baghag
7. On A Wonderful Day Like Today
8. House Everything
9. The Creativity in Me
10. Travel and Photography
11. Yesterday, Today and Tomorrow
12. You Are My Sunshine
13.Song to Remember 14. Super Blog
15. Philiippine Tv Marathon
16.Simply Blue
17. Breaking the Boundaries
18. Top Five
19. A Simple Life
20. Simple Happy Life
21.Mom’s Special Diary
22. The Mommy Journey
23. Mom Writes for a Cause
24.Earthlingorgeous.com
25. The Accidental Teacher
26. Daydream Believer
27. Chinese na Makulit