Now for this review, I am going to assume that you have read the book. If you have not yet read the book, then stop reading this review right now! I will be spoiling the film and book for you.

I have no idea why they insist on making Harry Potter into a 2 hour film, the story is at the point where 3 to 3.5 hours is needed to tell his complete chapter. This is a good film but it could have been so much better and that's what is so frustrating about this film, What could have been.

Now let's talk about what went wrong with this film.

. The aftermath of the Dementors attack. All we are shown in the film is the one letter sent by the ministry. We are not shown anything else. What was really missing was the fact that his Aunt Petunia knew what a dementor actually was. I just have a weird feeling that in the next book, this fact is going to be played out.

2. Harry's lack of anger at the beginning. The film never really lets him show just how alone he feels until the middle and the beginning of the film really suffers from it.

3. The reduction of Mr. and Mrs. Weasley and Dumbledore in this film. If you have read the book, this will make sense. I do not understand why they are slowly being written out of the film when they all pay huge roles in the next chapter.

4. Cho Chang. Now I have no idea why this was done in the film but, in the book Marietta Edgecombe is the one who betrays Dumbledore's Army, but the betrayal is instead committed by Cho in the film, effectively ending her relationship with Harry, but is later revealed to have been under the influence of Veritaserum while interrogated by Umbridge, dropping the whole hexed parchment storyline altogether. This made no sense at all and I thought really hurt the film.

5. Sirius Black. Now I have no idea why his role was reduced, but the two parts that did not be removed were his argument with Snape and his talk with Harry about what Harry saw during his Occlumency. Both of these events lead to Harry's total hatred of Snape. This becomes very important in the next chapter.

6. The total removal of the return of Rita Skeeter. This is where Harry tells all about what has happened to him and what really went down last year. It also omits "The Quibbler" With this removal, Harry's main school enemy ,Draco Malfoy, is reduced to a petty bully and this will really hurt the next chapter.

7. The reduction of Twin Weasley's escape scene, what could have been a lynch pin to a great scene and a much better movie, we are given a 1 minute show.

Now Lets talk about what went right with this movie

1. Luna Lovegood. I knew this was going to be a hard role to cast but Evanna Lynch pulls it off very nicely. She soon becomes the one person that can talk to Harry and at the same time becomes a voice of reason. This was a great choice.

2. Neville Longbottom. It was nice to see that they are allowing him to grow and to show that he is slowly overcoming his self doubt.

3. Umbridge. You will really believe that she is trying her best to blindly follow orders. I loved all of the cat plates that were in her office.

** Just watched HARRY POTTER and THE ORDER OF THE PHOENIX last night. And after early this morning I can’t wait to catch a good review online. I copied this review from an i-dunno-how-i-got-there-site and after I read the review these were the only words that I uttered.. “Exactly my sentiments!”

Switchfoot Concert 2007 for the benefit of abused & exploited children

YOU ASKED FOR IT!! NOW THEY'RE REALLY COMING TO ROCK ! IT'S BEEN CONFIRMED!!!!!

On September 10, 2007, the alternative rock band, SWITCHFOOT, will be staging a concert in , the for the benefit of IJM. Proceeds of the concert will help fund the legal and educational assistance provided to more than 100 children assisted by IJM.

New Way to Be Human

Dare you to Move

This is your life

Their latest CD is the rock scorcher "Oh Gravity!".

Centralized news will be in http://switchfootmanila.blogspot.com So go there and bookmark it!!! And call up for ticket reservations.

Early this morning, I checked my temperature and im already 38 degree C. Still, I took a bath, sipped Sopas for breakfast, then head to the office.

When got here, it’s still the same feeling.. feeling of anxiety, uneasiness, restlessness, discomfort and weakness. I didn’t pay attention to what I was feeling not until now.

I can’t hardly breathe and speak. I am always gasping for air. I am running out of air. I am feeling so weak.

At the same time that I am experiencing all this, the person that I care about makes me feel so unwanted. Not looking my way when I am near, casting me off like a fly wandering around.

My inside and out.

Only adds to my discomfort.

Its 12AM and im still here at the office. Just finished the Bring-you-Barangay Openhouse. Was it a success? I don’t know.

Many may not know what Openhouse is. Well, im too tired to explain. I wanna go home.

I blogged first before I actually arranged my things.

There im ready to go. Bye. 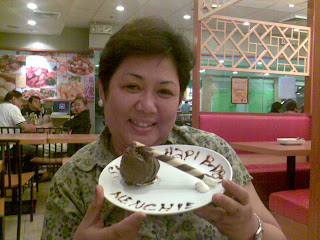 We celebrated it sa Trinoma, we ate sa family’s all-time favorite Super Bowl of China and Mom had a super birthday song from all the crews ;) O diba sosyal J

I am supposed to be blogging about what has happened to me the past few days, or should I say the past few months.. but right now that’s not what I want to blog about.

I am very bothered by what happened last Tuesday. It all happened at the wrong time.  Siguro hindi ko na ikkwento ang buong detalye, but it concerns someone that is very dear to me.

I have hurt someone very dear and very close to me. Aminado ako, it was really my fault. Sometimes, may mga bagay ako na ginagawa na akala ko eh malulusutan ko or magagawan ko ng paraan para di maging worst or masama. It happened last Tuesday, I went home at around midnight and I didn’t even informed my parents my whereabouts. They were furious ofcourse. They were mad. And until now they are not talking to me.

“I am very sorry for what happened. I really didn’t mean to disappoint you. I really didn’t mean for you to get worried. I hope you know how much I appreciate you and what you are doing to me. I am not taking you and your concern for me, for granted. I love you so much and it kills me now that you’re not talking to me and you’re not even looking at me. I hate it when you really made me invisible and just pretend that I am not around. I hope you know how sincere I am in saying that I am really sorry and I want us to be ok again. I love you so much Mom, Happy Birthday!”