Columbia Pictures pulls up a raunchy female comedy which may turn out to be Hollywood’s next hot genre, as opposed to raunchy comedies headlined by male actor.  The movie Bad Teacher stars Cameron Diaz as the ruthless middle school teacher being pursued by a co-instructor/gym teacher Jason Segel, but wants to win over Justin Timberlake because of his money.

In the film, Elizabeth Halsey (Diaz) is a teacher who just doesn’t give an F. She’s foul-mouthed, ruthless, and wildly inappropriate.  She drinks, she gets high, and she can’t wait to marry her meal ticket and walk away from her day job teaching middle school. When she’s dumped by her fiancé, she sets her plan in motion to win over a rich, handsome substitute (Timberlake) – competing for his affections with an overly energetic colleague, Amy (Lucy Punch) – but finds herself fighting off the advances of an irreverent gym teacher (Jason Segel). Elizabeth’s outrageous schemes and their wild consequences will shock her students, her coworkers, and even herself.
Cameron as the Ruthless Teacher 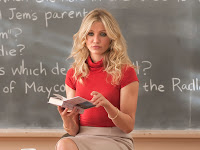 Cameron Diaz plays a foul-mouthed, and brutal middles school teacher who raises profanity to the level of high art in her title role. "It was all phonetic," Diaz said, laughing. "We started with an `F' and we ended up with a `K,' and, apparently, if you put these other two letters in between, it makes a very funny noise ... and people understand it." As Diaz explains, actors typically drop F-bombs on the set, even if it's not in the script. "Then you're, `God, you can't say that. We can't use that one,'" said the actress. But in the making of "Bad Teacher," Diaz said it was just the opposite: "You're like, `More F-bombs, give it to us' in this film. So to be able to be on set and have your director screaming that at you is a lot of fun. Everybody is just laughing."
Jason as the Persistent Gym Coach 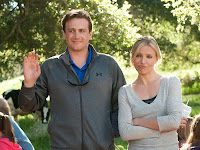 Jason Segel comes back with another yet comedy role as the romantic gym coach who’s hopes are high for Cameron. “Russell is just a happy-go-lucky guy,” says Segel of his character.  “He’s just enjoying life and looking for other people who can hang.  I think that’s why he gets along with Elizabeth – if she’d just let her guard down.” How can he keep getting turned down by Elizabeth but keep coming back for more?  “He’s just not fazed by rejection,” says Segel.  “In fact, there’s something safe about flirting with a girl who tells you right from the beginning that it is never going to happen: there’s no risk.  Women can keep saying no – all he needs is one to say yes.” “Jason is hilarious, but he plays the only normal person in the entire movie,” says co-screenwriter Lee Eisenberg.  “He can call out Elizabeth on her stuff, he can react when she says something ridiculous.  He grounds the movie.”
Justin as the Object of the Bad Teacher’s Affection

Justin doesn’t have any idea about how Cameron would like to win his heart because of his money. “On paper, Scott is very, very nice,” says Timberlake.  “He seems like your average, rich, blue-blooded guy, and very non-confrontational.  That’s actually fun to play, because as Lucy’s and Cameron’s characters get more and more petty, he gets more and more awkward.” Timberlake says that with the writers on set and a director who encourages collaboration, “Bad Teacher” was a fantastic experience.  “The role, as it was written on the page, was really funny.  Then, when we were in the middle of a scene, Jake would have great instincts, adding a layer each time we did it.  The writers would have very funny alternate lines to build on.  All of this helped make the character more and more specific, and, I think, funnier and funnier.” “I like it best when the comedy is based around character, not gags,” he says.  “In drama, if there’s an emotional moment in a movie, it’s because the viewer has followed the character through the journey and it means something to them.  Comedy is the same way – if you’ve followed the characters, it makes it even funnier.” Surrounded by such a funny cast, he says, was a blast.  “I’m just a fan, I really am,” he says.  “It’s great to play in the sandbox with these brilliant comedic minds.” Timberlake, of course, has achieved great heights as a recording artist and songwriter, and he gets to parody his persona in “Bad Teacher.”  “Scott is asked to join the teachers’ band, Period 5,” he explains.  “Scott is everyone’s favorite – sort of the guy that the teachers wish the students were like – so of course they ask him to join.  The writers came to me – they thought it would be really funny if there was an actual song Scott had written for Amy.  We wanted to see how simple, and bad, we could make it,” says Timberlake.
Opening across the Philippines August 31, “Bad Teacher” is distributed by Columbia Pictures, local office of Sony Pictures Releasing International.  Visit www.sonypictures.com.ph to see the latest trailers, get free downloads and play free movie games.
Posted by Cathie Alhambra