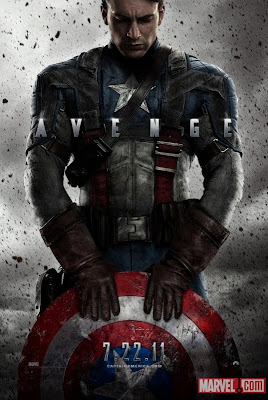 Steve Rogers volunteers to participate in an experimental program that turns him into the Super Soldier known as Captain America. As Captain America, Rogers joins forces with Bucky Barnes and Peggy Carter to wage war on the evil HYDRA organization, led by the villainous Red Skull.


I am not a comic book fan, and this is my first to watch a Captain America movie. I also don't really know his story so I don't know what to expect, but let me tell you some things I like about the movie. THE STORY. It follows the fate of a young man who wished to join the army and defend his country, and ended up more than he wanted. The hope of achieving something and finally getting it is something that encourages us to strive hard for our personal ambition. The old-fashion blockbuster presents the not-your-typical-world war 2 – movie, with the war, the hero and the seemingly impossible enemy. THE VISUAL. I would recommend watching it in 3D so you will appreciate Captain America’s body transformation, kidding! I just find the CGI transformation of Steve Rogers really fantastic, I actually remembered the movie Benjamin Button. THE ACTORS. Chris Evans is so hot, ‘nuff said. Hayley Atwell is a first time love interest for me, and she did a pretty good job as Agent Carter (who says women can’t be on battlefield?) ofcourse, Hugo Weaving is the perfect villain.
The future of comic book movie is here. The year 2011 and 2012 is the year of the super heros. Watch out for them.
Captain America: The First Avenger is still showing across all theatres and is distributed and produced by Paramount Pictures and Marvel Studios.
Posted by Cathie Alhambra