“The Croods” is a prehistoric 3D comedy adventure from DreamWorks Animation to be distributed by 20th Century Fox that takes us back to the beginning of time. In a previously undiscovered era known as the Croodacious – we find the Crood family when Mother Nature was still experimenting and the flora and fauna we know today hasn’t evolved yet is where the story all began.

At the center of this world is the Crood family, led by Grug (voiced by Academy Award® winner Nicolas Cage), an over-protective father who, like all dads, is doing all he can to hold his family together at a time when cataclysmic changes are happening. Together with his wife (Catherine Keener), kids (Emma Stone and Clark Duke) and ornery mother-in-law (Cloris Leachman) in tow, Grug guides his family through this spectacular environment, full of amazing creatures, to find a new cave to call home. Along the way, they encounter Guy (Ryan Reynolds), an imaginative and resourceful newcomer who takes risks and wholeheartedly embraces the promise of tomorrow.

Inspired to tell a story of how a family survives during tough times, directors Kirk De Micco and Chris Sanders set the story in a prehistoric frame when they don’t have to worry about bills, but is concerned on how they would adapt to the world changing before their very eyes. “This is the world’s first family road trip,” says De Micco while Sanders shares that “Our cavemen are very gifted, they can run 40 miles an hour, can throw a rock many many miles and very physically capable, but mentally we have a lot of beginner minds.”

Take a look at the world’s first family – The Croods family photo: (from left to right)

Thunk (Clark Duke): The middle-sibling who stands 6-foot and weighs 9, 320 pounds, and 9 years old who has the best heart and the worst coordination.

Sandy the baby: Who doesn’t speak but more of growls and is one tough kiddie survivor.

Ugga (Catherine Keener): The open-minded wife of Grug who like moms around the globe tries to keep her family alive and fed all the time.

Eep (Emma Stone): The adventurous daughter of Grug and Ugga who likes to try new things.

Grug (Nicolas Cage): He is the animated caveman version of well-meaning but hopelessly outdated dad and leader of the clan. 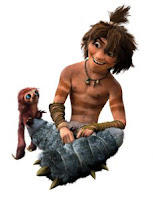 Guy (Ryan Reynolds, in a separate photo with his sloth-like pet): A prehistoric revolutionary guy who prefers using his brain and comes up with new ideas with whom Eep falls in love.

“The Croods” will open in cinemas March 30, 2013.
Posted by Cathie Alhambra