Rise of the Planet of the Apes Trailer & Visuals

WETA Digital, the industry-leading and Academy Award® winning visual effects house behind the wizardry of films such as “Avatar,”  “The Lord of the Rings Trilogy,” and “District 9” held a live streaming event on Facebook, for “Rise of the Planet of the Apes” from their headquarters in Wellington, New Zealand.  The online event gave viewers an exclusive, behind-the-scenes look at their work on the film wherein the magic of rendering produced the world’s first photo-real ape as related by WETA’s  Joe Letteri and Dan Lemmon. 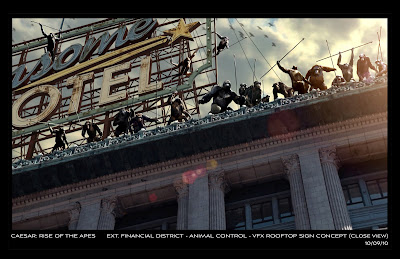 The movie is a reality-based cautionary tale that blends science fiction and science-fact  when a single act of both compassion and arrogance leads to a war unlike any other.  Set in present-day San Francisco, Will (Franco) has long been working on a cure that is being tested on apes when his test subject named Caesar (Serkis) starts exhibiting intelligence equal to humans. Caesar starts to evolve rapidly, and the scientist takes him home to live with him and protects Caesar from cruel scientists.  A revolution then starts that threatens mankind’s existence and the beginning of a new race.
WETA’s work on “Rise of the Planet of the Apes” presented very different challenges and opportunities.  In addition to the main CG character, Caesar that gives a performance of unprecedented emotion and intelligence, the apes will not be actors in costumes but rather rendered digitally to be photo-realistic and WETA is applying some of the technology it developed for ‘Avatar’ to bring to life a real world – and epic battles on which rest the upended destinies of man and primate.
Directed by Rupert Wyatt from a screenplay by Rick Jaffa and Amanda Silver – “Rise of the Planet of the Apes” is a 20th Century Fox offering to open on August 5 (Friday) in theaters worldwide.
Posted by Cathie Alhambra

Email ThisBlogThis!Share to TwitterShare to FacebookShare to Pinterest
Labels: Rise of the Planet of the Apes, Rupert Wyatt, WETA Digital