Diary of A Wimpy Kid: Rodrick Rules is Now Showing 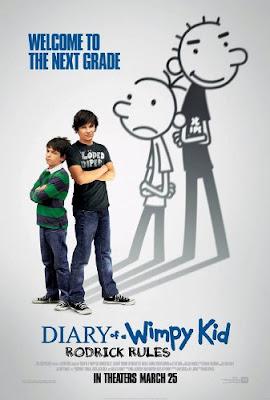 Greg, the wimpy kid is back on the big screen taller and wiser but still has a lot to deal with to score points against his big brother Rodrick.  In the upcoming heartwarming family-oriented movie based on the best-selling book by Jeff Kinney of the same title “Diary of  A Wimpy Kid: Rodrick Rules,” Greg deals with Rodrick’s attempts to ruin his whole summer.
Much like his electrifying drumbeats, Rodrick fries Greg in a series of unprecedented pranks enough to make Greg’s whole summer an episode of fear and embarrassment.
Devon Bostick, returning as eldest sibling Rodrick, was thrilled the character is front and center in this second Wimpy Kid story. “The title is ‘Rodrick Rules,’ so that means, a lot more Rodrick this time,” says the young actor. “In this movie, you get to see a brighter side of Rodrick, but also a darker and goofier side. 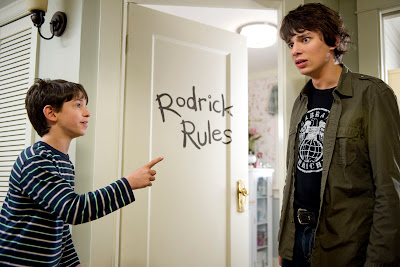 “Rodrick torments Greg 24/7,” Devon continues. “But he feels like he’s teaching Greg some tough lessons about life.  Rodrick thinks that if Greg can get past the pranks, then he can do anything.”   The brothers eventually bond over a shared secret; are they actually becoming…friends?  “Rodrick wants to take Greg under his wing,” adds Bostick. “Rodrick rules in a few ways: the first is ruling by being an awesome role model to his younger brother – despite the pranks Rodrick plays on Greg.  The other is that he has a set of rules that he considers the way to an easy life and he teaches these to Greg.”
Rodrick’s Rules – the worldly advice he shares with his little brother – include such pearls of wisdom as: Don’t be good at anything you don’t want to do; always lower Mom and Dad’s expectations; and never do something when someone else can do it for you.  Rodrick’s primary interest – apart from making life miserable for Greg – is the elder sibling’s band Löded Diper, in which he serves as drummer.  The band members are neither polished nor innovative, but they are enthusiastic, and Rodrick is its heart and soul. He spends more time practicing his twirls and looking good as a drummer than he does on drumming.
Like his on-screen alter ego, Devon embraced being a rock-n-roller.  Says Simpson: “Devon really studied the drumming intensely because, even though we wanted him to be a not-great drummer, he had to play with conviction.”  For a month, Devon squeezed in as many drumming lessons as possible.  He proudly notes, “In real life, I became better than Rodrick, and in only seven days of practicing!”
Simpson notes that when they were originally casting the role of Rodrick, “A lot of people played him as a classic bully.  But Devon had a great sense of humor about the character and had fun being the evil, torturing older brother. Once we had Devon, we knew fans would accept Rodrick because Devon makes us feel that there is some love underneath Rodrick’s attitude toward Greg.  Rodrick is just doing what older brothers do.”
“Diary of  A Wimpy Kid: Rodrick Rules” is Now Showing in Metro Manila and Cebu theaters from 20th Century Fox to be distributed by Warner Bros.
Posted by Cathie Alhambra