WILL SASSO Q&A: The Bald Stoogie known as Curly

The all-new motion picture, THE THREE STOOGES, in theaters October 24, is a contemporary take on a trio of time-honored boneheads. The film recreates the classic and iconic Stooge sound effects (including "boinks," finger snaps, and palm claps), haircuts and other Stooge-isms- -- while interweaving them with modern-day attitudes, situations and pop culture references. 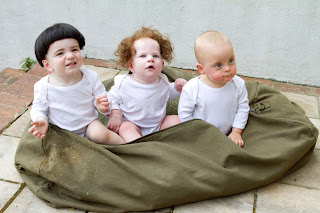 In the film, we meet the Stooges as newborn "angels from heaven." That's how the nuns characterize the three toddlers left at their orphanage. But when one of the nuns, Sister Mary-Mengele, receives a fierce eye-poke from Moe, which catapults her into the next county, they suspect the new arrivals are anything but heavenly. 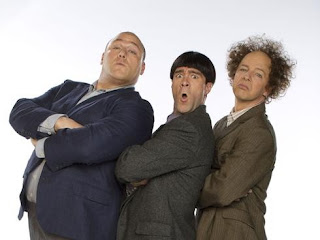 Now, years later, their Three Stooges have left the nuns bruised, battered and bewildered. Even worse, it looks like the orphanage will be forced to close its doors due to financial difficulties. But Larry, Curly and Moe, employed as the foster home's inept maintenance men, are determined to come to the rescue. Their quest: raise $830,000 in just 30 days, or risk losing the only home they've ever known. 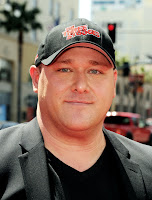 Will Sasso, who made an impression as MADtv's resident impressionist, where he brought to life the likes of Elton John, Kenny Rogers, Bill Clinton and Elvis Presley, worked hard to capture the unique rhythm and cadence of Curly's voice. Playing Curly is Will Sasso who dishes out on the following q&a what it’s like to be a Stooge.

Q: What can you tell us about the storyline and structure?
A: It reflects the original shorts, with great respect. When you go to see the movie it will be like you’re going to the matinee back in the day and were watching three Stooges shorts in a row, but instead it will be three acts of a single movie.

Q: Was there any trepidation on your part in playing someone as well known as Curly?
A: Well, it helps to be a bald, fat guy! You know, I’d like to think I had a little bit of cabbage growing on top of my head but then this project comes along and I had to cut even that half-inch off…

Q: The Curly voice is pretty distinctive too. How did you get that right?
A: The most interesting voice to me of Curly’s is just his normal speaking voice, which emerged the later the Stooges went on. But the first step was, ‘Oh, okay, I can do it. I can do that voice.’ Then it’s about getting it better and better.

Q: The original Stooges roles were very physical – are they equally physical here, and are you doing your own stunts?
A: Any time we slap each other it’s one hundred percent real. And a lot of the rest of it is really intense stuff. We’re getting hoisted in the air a lot on these harnesses that look like rope diapers. It’s insane.

“The Three Stooges” opens October 24 in cinemas from 20th Century Fox to be distributed by Warner Bros.
Posted by Cathie Alhambra

Email ThisBlogThis!Share to TwitterShare to FacebookShare to Pinterest
Labels: Comedy, The Three Stooges, Will Sasso