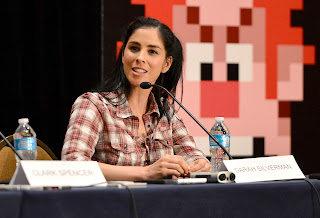 Known as “The Glitch,” Vanellope is a pixelating programming mistake in the candy-coated cart-racing game Sugar Rush. With a racer’s spirit embedded in her coding, Vanellope is determined to earn her place in the starting lineup amongst the other racers. Only problem: the other racers don’t want her or her glitching in the game. Years of rejection have left Vanellope with a wicked sense of humor and a razor-sharp tongue. However, somewhere beneath that hard shell is a sweet center just waiting to be revealed.

“With Vanellope, we were looking for a character that would mirror Ralph’s struggles,” says screenwriter Phil Johnston. “She’s an outsider. The kids pick on her. Nobody really likes her and they exclude her from the races. And all she wants to do is race—to be part of the game—just as Ralph wants to be a part of his community in Niceland.”


When it came to casting Vanellope, filmmakers knew what they didn’t want. “We didn’t want a child to play the part,” says director Rich Moore. “We wanted someone who was acerbic and quick, and could carry the more serious parts of the performance.”

Enter Sarah Silverman, whose quick wit and likability lend themselves perfectly to the Sugar Rush resident. But Silverman brings something to the role that audiences might not expect. Says Moore, “We all know Sarah Silverman is funny—she’s a comedian. But Sarah’s a great dramatic actress as well.”

Adds animation supervisor Renato dos Anjos, “The performances that Sarah brought to the table were so rich. There was so much emotional content that matching it in animation was tough. It’s not easy. But we had very talented artists who worked on Vanellope’s scenes to make sure she had strong, appealing performances.”

With the friendship between Vanellope and Ralph being integral to the emotional core of the movie, filmmakers had Silverman and John C. Reilly (who provides the voice of Ralph) record many of their scenes together, which is uncommon for an animated film.

“John and I were able to record together a lot,” says Silverman. “It’s fun to be able to look into someone’s eyes when you’re saying the lines and to improvise off of each other. We improvised, we overlapped. It felt very organic.”

“Ralph and Vanellope don’t really like each other at first—she gives him a hard time—but they start to realize that they’re a lot alike. They’re both misfits. “They’re both broken characters when we meet them,” says producer Clark Spencer. “They both are desperate to be something else, which they think will help them get the acceptance and love they crave.”