Nicolas Cage reprises his role as Johnny Blaze in Warner Bros.' new action-thriller “Ghost Rider: Spirit of Vengeance.” In this gritty new vision for the character, directed by Neveldine/Taylor (“Crank”), Johnny is still struggling with his curse as the devil’s bounty hunter – but he may risk everything as he teams up with the leader of a group of rebel monks (Idris Elba) to save a young boy from the devil… and possibly rid himself of his curse forever. 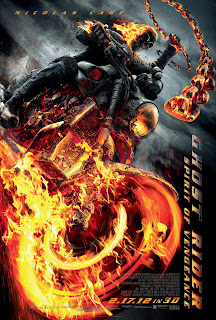 “Ghost Rider: Spirit of Vengeance” is written by Scott M. Gimple & Seth Hoffman and David S. Goyer, with a story by Goyer based on the Marvel Comic.

Opening across the Philippines on February 2012, “Ghost Rider: Spirit of Vengeance” is distributed by Warner Bros. Pictures, a Warner Bros. Entertainment Company.
Posted by Cathie Alhambra