Shooting underway on new adaptation starring Leonardo DiCaprio in the title role,
under the direction of Baz Luhrmann.
PRESS RELEASE:
Principal photography began this week on Warner Bros. Pictures’ and Village Roadshow Pictures’ “The Great Gatsby,” the new big screen adaptation of F. Scott Fitzgerald’s novel from the uniquely imaginative mind of writer/producer/director Baz Luhrmann.  The filmmaker will create his own distinctive visual interpretation of the classic story, bringing the period to life in a way that has never been seen before.  Leonardo DiCaprio stars in the title role.
“The Great Gatsby” follows Fitzgerald-like, would-be writer Nick Carraway as he leaves the Midwest and comes to New York City in the spring of 1922, an era of loosening morals, glittering jazz and bootleg kings.  Chasing his own American Dream, Nick lands next door to a mysterious, party-giving millionaire, Jay Gatsby, and across the bay from his cousin, Daisy, and her philandering, blue-blooded husband, Tom Buchanan.  It is thus that Nick is drawn into the captivating world of the super rich, their illusions, loves and deceits.  As Nick bears witness, within and without the world he inhabits, he pens a tale of impossible love, incorruptible dreams and high-octane tragedy, and holds a mirror to our own modern times and struggles. 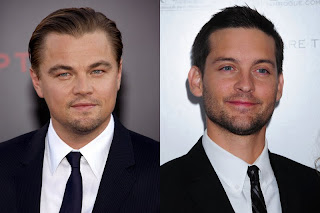 Academy Award® nominee DiCaprio (“Blood Diamond,” “Aviator”) plays Jay Gatsby, with Tobey Maguire starring as Nick Carraway; Joel Edgerton and Oscar® nominee Carey Mulligan (“An Education”) as Tom and Daisy Buchanan; Isla Fisher and Jason Clarke as Myrtle and George Wilson; and newcomer Elizabeth Debicki as Jordan Baker.  Indian film legend Amitabh Bachchan will play the role of Meyer Wolfsheim.
Oscar® nominee Luhrmann (“Moulin Rouge!”) directs the film in 3D from a screenplay co-written with frequent collaborator Craig Pearce, based on Fitzgerald’s book.  Luhrmann produces, along with Catherine Martin, Catherine Knapman, Lucy Fisher and Academy Award® winner Douglas Wick (“Gladiator”).  The executive producers are Barrie M. Osborne and Bruce Berman.
Two-time Academy Award®-winning production and costume designer Catherine Martin (“Moulin Rouge!”) also designs with the director.  The editors are Jason Ballantine, Matt Villa and Jonathan Redmond, and the director of photography is Simon Duggan.
Luhrmann said, “Fitzgerald loved the movies and was a passionate believer in the power of cinema.  “The Great Gatsby” has been adapted for the screen no less than four times. Fitzgerald’s story defies time and geography.  The vision and the goal of our remarkable cast and creatives is to do justice to the deftness of Fitzgerald’s telling, and illuminate its big ideas and humanity.  This is our challenge and our adventure.”
“The Great Gatsby” is being shot in Luhrmann’s native Australia.  The filmmaker stated, “The opportunity to make the film in Australia with the Bazmark creative team is very important to us; the assistance from Screen Australia and the NSW Government has made that possible.”
The film will be distributed in 3D and 2D by Warner Bros. Pictures, a Warner Bros. Entertainment Company, and in select territories by Village Roadshow Pictures.
Posted by Cathie Alhambra