The country’s No. 1 tuna brand unveils a sexier, healthier image as it reveals its newest celebrity endorser, football star Phil Younghusband. The Azkals heartthrob joins current image model, top actress Angel Locsin in a new campaign, “Showing Off the Best in You with Century Tuna,” which celebrates individuality and healthy living in today’s world. 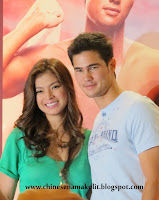 I was invited to an intimate event that launches the newest addition to the Century Tuna's roster of healthy, fit & sexy superbods. Century Tuna's senior brand manager, Angela Gamboa quoted that "Phil is the perfect role model for individuals today who are into getting fit and healthy and living a happy, positive life."

Phil’s positive image among the youth and fitness enthusiasts perfectly represents what Century Tuna is all about.  As he joins Angel for the new campaign, Phil is all set to inspire individuals express themselves and their passion for healthy living – showing off a sexier, healthier you with Century Tuna.

“I’m grateful to be chosen as one of the endorsers of Century Tuna and I’m very thrilled to be working with Angel for this project,” said Phil.  “I always eat Century Tuna; it’s part of my daily diet and it helps me with my games.”

Angel is likewise excited to headline the new Century Tuna campaign with Phil.  “It’s another good project to inspire people to be healthier.  I’m excited to work with Phil also because he’s a good role model and active in sports just like me.”

Phil and Angel can now be seen in the new Century Tuna TVC currently on primetime TV.  The new TVC emphasizes how people today can show off the best in themselves with Century Tuna Flakes in Oil, which contains the highest level of Omega 3 for brain power, healthy body and strong heart.
Posted by Cathie Alhambra