A go-getter pilot-turned-businesswoman, Carol has always been by-the-book, enabling her to move up in the ranks at her father’s company, Ferris Aircraft, making her now…Hal’s boss.
“We’ve got explosions and fights and trips to outer space and back, but I love that the movie also has a great sense of fun and a hint of romance about it,” shares Lively.  “And the Green Lantern Corps should appeal to women, too—representing virtually every species of alien imaginable, it’s definitely not a men’s-only club.”
Lively adds, “Regardless of what they might have felt, or feel, for each other, Hal and Carol have always butted heads.  She’s no damsel in distress.  Like Hal, she’s a test pilot, and now that she’s about to inherit her father’s company, she’s in a position to really question him.  And even after this unbelievable thing happens to him, she challenges him as much as he challenges her.  If he can’t believe in himself, she’ll believe in him enough for the both of them.  She’s not about to let him walk away from this amazing opportunity.”

“Carol is the alpha female in the film, and she really helps to enrich the story’s emotional spine,” director Martin Campbell asserts.  “She’s strong and capable and responsible—everything Hal is not when we first meet him.  And Blake truly combined all those qualities in a completely natural way.  She was just great.”
Reynolds was not the only one who had to undergo training for the film’s exciting action sequences.  Lively also had to prepare to be suspended in mid-air on a Matrix rig for a scene in which Carol is in the grip of a villain’s telekinetic powers. 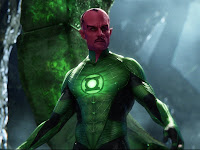 In Warner Bros.' 3D action-adventure, Sinestro mourns the loss of fallen Lantern Abin Sur as strongly as he questions the choice of Hal to take his place; although, according to everything he knows, the ring that chooses a Green Lantern never makes a mistake.
Strong was drawn to the film’s thematic issues.  “I’m intrigued by the notion of the balance between fear and will.  This is a story about what you can achieve, and overcome, if you put your mind to it, and it’s told in a really dynamic, electrifying way.”
Sinestro is one of only two humanoid aliens portrayed by an actor, albeit under heavy prosthetic makeup.  “He’s a very hard task master, but it’s all done for the right reasons; he’s totally committed to the cause,” Strong justifies.  “He genuinely believes in the Corps and that they can keep peace in the universe.” 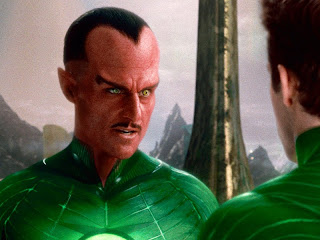 Part of Sinestro’s skepticism with regard to Hal’s capabilities stems from his feelings about the human race, which he deems too young, arrogant and unexceptional to be part of the Corps.  “He doesn’t think humans are worthy, so he is extremely dismissive of Hal, thinking him bound to be the weak link.  Of course, a lot of those feelings exist because he doesn’t think Hal can ever live up to the memory of his former colleague, mentor and friend, Abin Sur.”
Opening across the Philippines on June 16 in 3D, 2D and regular format,  “Green Lantern” will be distributed worldwide by Warner Bros. Pictures, a Warner Bros. Entertainment Company.