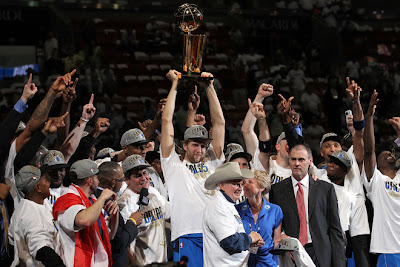 Congratulations Dallas Mavericks for winning Game Six of the 2011 NBA Finals at American Airlines Arena on June 12, 2011 in Miami, Florida.
Last 2006 Miami won the title against Dallas with score 4-2. This year the Dallas won the title with score 4-2. Awesome right? Haha. It has been an emotional win for the team. I have watched only game 4 and 5 and I really saw teamwork in the team. During game 6, Dirk did not play good but that did not stop the team from winning the game. Jason Kidd, JJ Barea and Jason Terry stepped up and helped the team bag the title.

German Power Forward, Dirk Nowitzki of Dallas Mavericks won the 2011 MVP of NBA Finals for his great help and contribution to the team for winning the 2011 NBA Champion. Not even flu nor injury stopped Dirk in leading his team to their 1st NBA Championship title.