Making Lies then Just Go With It

Columbia Pictures' new romantic comedy "Just Go With It", pairs up Adam Sandler and Jennifer Aniston. In the film, a plastic surgeon (Sandler), romancing a much younger schoolteacher, enlists his loyal assistant (Aniston) to pretend to be his soon to be ex-wife, in order to cover up a careless lie.

Jennifer Aniston pretends to be Adam Sandler's wife, Katherine.
How does a single mom like Katherine, trying to get by and provide for her two kids, get roped into Danny’s outrageous scheme? “She’s just exhausted by him,” says Aniston. “She feels she has to help him save himself from his own web of lies, even though she doesn’t approve. When she’s in the middle of it, you can see her thinking, ‘How did I get on board with this?’”

Adam Sandler plays Danny, the surgeon who created a web of lies.
At the center of “Just Go With It” is an everyday guy who has let a careless lie get away from him. “At the beginning of the movie, my character, Danny, was going to get married, but he gets his heart broken,” says Adam Sandler. “The night of his heartbreak he happens to have the ring on and a young lady is nice to him, because she thinks he’s married and thinks he’s harmless and won’t do anything that other guys were trying to do. A light goes off in his head.” 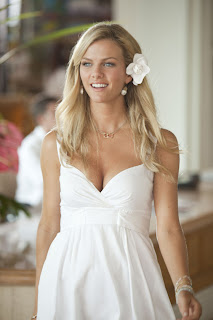 Supermodel Brooklyn Decker – also known as wife of tennis player Andy Roddick – makes her big screen acting debut opposite Adam Sandler and Jennifer Aniston. It might have been intimidating to take on such a key role for her first film, but Decker couldn’t have asked for a better set. “I’m the new kid on the block, and I’m surrounded by these amazing people, but they were all very encouraging and made the set a lighthearted place.  Everyone was so talented – everyone was funny – it was really an opportunity for me to challenge myself under the best circumstances.”
“Every lie has a domino effect,” says director Dennis Dugan.
Opening across the Philippines on Feb. 16, “Just Go With It” is distributed by Columbia Pictures, local office of Sony Pictures Releasing International.
Posted by Cathie Alhambra