A massive unmanned locomotive, nicknamed “The Beast” and loaded with toxic cargo, roars through the countryside, vaporizing anything put in front of it. A veteran engineer(Denzel Washington) and a young conductor (Chris Pine), aboard another train in the runaway’s path, devise an incredible plan to try and stop it – and prevent certain disaster in a heavily populated area. 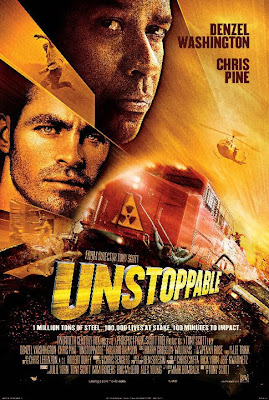 The Story is great. The plot came in at the early part of the movie and after that you just have to hold on to your seat as the intensity build up. I like how the story revolves with ordinary people, and a very unlikely situation in a town. Denzel and Chris is a good team up, they complement each other’s line in the movie. Denzel is a great actor with or without gun. Expect a roller coaster ride while watching the movie, except, you won’t see a roller coaster instead a roaring monster train. I find the movie a bit technical also, because of the nature of the problem, but it’s easy to understand even if you’re not adept to trains and how it works. The intensity and excitement of the movie will leave you breathless and you’ll find yourself joining the gasps of all movie viewers in every extreme part of the movie.

Unstoppable is directed by Tony Scott and opens in cinemas on November 12.