Ten years and seven movies later, the series based on J.K. Rowling's epic tale of the boy wizard comes to an end with the eighth film, “Harry Potter and the Deathly Hallows - Part 2.” The seventh book, which finds Potter and his trusty friends in all-out war against the evil Lord Voldemort for the salvation of the non-magical and wizarding worlds, was split into two films.
The first half, which came out on November last year, has earned $285 million at the U.S. box office, $900 million worldwide. The second film comes out July 14. The countdown to the "Harry Potter" finale just got faster with Warner Bros. big reveal of the first trailer of the "Harry Potter and the Deathly Hallows - Part 2".

Warner has released a Special Content Trailer containing retrospective elements including charming footage from Daniel Radcliffe, Rupert Grint and Emma Watson’s initial screen test during auditions for the first film as well as other fantastic moments with our heroes from subsequent films but focuses mainly on “Deathly Hallows – Part 2.”


"The very last one's a big old epic, with lots of battles and dragons and goblins. It's going to be operatic. And then it's over," says director David Yates.
"The decision to split this into two was purely a creative one. By doing two, there's more detail and more time to engage with the characters in the way that we do," says producer David Heyman. "It allows the audience time to bring themselves to it. The audience has the time to project their own feelings and engage with the characters."

Asked if he's feeling nostalgic, Yates says, "I don't think we ever took it for granted. We'd sometimes joke about what we're going to do when it's all over. We'll never have this amount of resources again. We're going to have to go back into the real world, after living in this bubble." 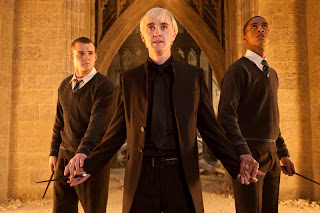 Actor Tom Felton has played Draco Malfoy, Harry's nemesis at Hogwarts School of Witchcraft and Wizardry, since the first film — “Harry Potter and the Sorcerer's Stone” — in 2001. He and the core cast — including Daniel Radcliffe as Potter, with Emma Watson and Rupert Grint as his pals Hermione and Ron — return for one last time. 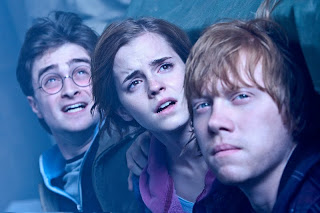 "One of the greatest gifts that Jo Rowling and the whole franchise has given (the actors) is that we can really end up making a kid's night just from saying hello," Felton says. "I was 12 when we started shooting; 13 when it came out. I'm 23 now. It's been a long journey.
"You don't see people growing up, not when you're there. It's only when you look back at the films. ... Look at Daniel! He was bloody tiny. My face was like a basketball. But those angelic features seem to have left me," he jokes.

"The last film will be it. It's never going to be like this again. You never take this for granted," Heyman says. "You want to do the end justice, so there's a little bit of anxiety."
Distributed by Warner Bros., “Harry Potter and the Deathly Hallows – Part 2” will be released in Philippine theatres and IMAX, in 3D and 2D, beginning July 14, 2011.
Posted by Cathie Alhambra