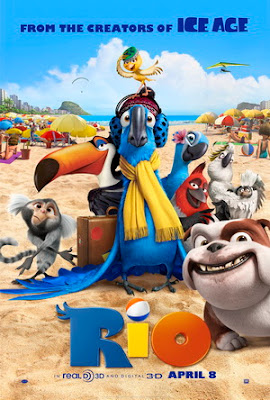 RIO is a 3-D animation feature from the makers of the Ice Age films. Set in the magnificent cit of Rio de Janeiro and the lush rainforest of Brazil, the comedy-adventures centers on Blu, a rare macaw who thinks he is the last of his kind. When Blu discovers there's another - and that she's a shee - he leaves the comforts of his cage in small town Minnesota and heads to Rio.

But it's far from love at first sight between the domesticated and flight-challenged Blu and the fiercely independent, high flying female, Jewel. Unexpectedly thrown together, they embark on an adventure of a lifetime, where they learn about friendship, love, courage and being open to life's many wonders.

I was invited to watch the movie premiere of Rio last Saturday at Glorietta. I enjoyed the film soo much! I felt like I was 8 yrs old again. It was a good experience watching a film with kids surrounding you with their laughter. Too bad Nathan wasn't able to join us.

Rio centers on Blu, voiced by Jesse Eisenberg and Jewel (Anne Hathaway) the last two macaw who is destined to save their species. It was a very heartwarming story, good for the kids and kids at heart. Director Carlos Saldanha concocts a sparkling view of scenic Brazil, because of his passionate advocate from his hometown. I also like the soundtrack, soo much! The danceable beat of Will.I.am and Jamie Foxx made the theatre grooving throughout the movie. I bet the kids are so amused with the songs and even the dance! The dubbing is superb also, plus the singing! I have never imagined Brazil to be that b-e-a-u-tiful. Wow! Make me want to go to Brazil to see for myself the beautiful sky and peaceful sea.

Rio brings together a menagerie of vivid characters, a heart-warming story, colorful backdrops, energizing Latin and contemporary music, and family-friendly song and dance. Check out the intervactive website of Rio - www.rio-themovie.com/us

RIO opens in 2D and 3D formats in theaters all over the Philippines on April 7, 2011 (Thursday) from the 20th Century Fox to be distributed by Warner Bros.
Posted by Cathie Alhambra