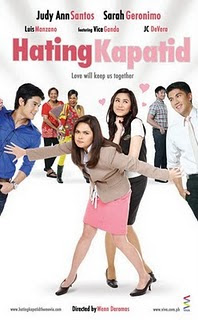 Two of the country’s biggest superstars, together for the first time in a landmark team-up.

In this comedy, Judy Ann stars as Maria Rica and Sarah is Maria Cecilia, daughters of public school teachers turned OFW. Left in the care of their Lola Gerty (Gina Pareño), Rica and Cecilia grow up in Bocaue, Bulacan, where they help look after the family’s firecracker business. The two girls are inseparable. Rica takes her role as the big sister seriously, to the point of breaking up with her boyfriend, Bong (JC DeVera), and vowing to devote her life taking care of Cecil when the latter is hurt in a minor accident.

Ten years come to pass and their parents return home. The family moves to Manila. Rica, though an Accounting Major graduate, chooses to sell jewelry instead of getting a professional job. Cecil, on the other hand, works as a sales clerk in a video store and a promodizer of magic sing. She meets Edsel (Luis Manzano), an insurance sales agent. Rica, sensing that the two are attracted to each other tries hard to keep them apart. Cecil, wanting to make Rica happy, tracks down Bong, but the result is the exact opposite. Rica feels betrayed, especially when she learns that her baby sister is already in a relationship. She ups and leaves. Now it’s Cecil who has to find a way to fix this.

The movie is directed by Wenn V. Deramas and is written by Mel Mendoza-Del Rosario, the same team behind the record-breaking Tanging Ina series.

I was invited to watch the red carpet premier of Hating Kapatid. It was around 9pm when the artists arrived and the movie started. Grabeh and mga taong naghihintay sa cast to walk the red carpet. The movie actually made me jump out of my seat a few times coz im laughing so hard, may it be coz of Sarah, Judy Ann, Luis and especially Vice! The movie is really entertaining from start to finish, the story is very close to every filipino family. We can relate to every character in the movie. Expect a lot of Sarah endorsements, haha! I like how it was inserted in the film, actually. Sarah and Judy Ann's acting never fails. The crowd was really entertained!
Posted by Cathie Alhambra