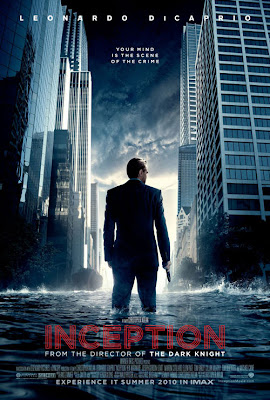 Dom Cobb is a skilled thief, the absolute best in the dangerous art of extraction, stealing valuable secrets from deep within the subconscious during the dream state when the mind is at its most vulnerable. Cobb's rare ability has made him a coveted player in this treacherous new world of corporate espionage, but it has also made him an international fugitive and cost him everything he has ever loved. Now Cobb is being offered a chance at redemption. One last job could give him his life back but only if he can accomplish the impossible -- inception. Instead of the perfect heist, Cobb and his team of specialists have to pull off the reverse: their task is not to steal an idea but to plant one. If they succeed, it could be the perfect crime. But no amount of careful planning or expertise can prepare the team for the dangerous enemy that seems to predict their every move. An enemy that only Cobb could have seen coming.

I still can't find the right words to describe this movie. The awesomeness from the storyline to the effects, to the actors, to the direction is all but great.

Story. A movie is only as great as the story and the storyline. I believe that even if the characters are not that well known, the movie can move on with a good story. Inception is one great movie. It's been a week (late post, i know) and still I can't get the movie out of my mind. The complexity of the story is what makes it great! You will really need to analyze and pay close attention to every scene, every move and every line. If you know Air Bender, then I call this movie, Mind Bender. Nolan has planted the idea that this movie will reap millions after the first showing, haha!

Actors. Leonardo Di Caprio has proven himself in almost all of his films. Even the new actors Ellen Page and Marion Cotillard, were excellent in their own roles. I appreciate Ken Watanabe and Joseph Gordon-Levitt in the team and their characters as well. The whole team, did very great.

Effects. Visuals. It was made clear how one can share and explore dreams, even build something in the dream. Nolan is genius to even make it multi layered. Watch out for the second level non gravitational fighting scene of Joseph Gordon-Levitt, i love it! The setting of the dreamworld would let you wander and make your mind create a world that you desire.

Inception is a movie that will stay long, the talk of the town kind of movie, even after it has been released. Every bit of the movie is just brilliant, from the director, actors, effects, and even the production. Kudos!

Email ThisBlogThis!Share to TwitterShare to FacebookShare to Pinterest
Labels: movies