If you want to see more of Robert Downy then you better get ready as he portrays the eccentric detective, Sherlock Holmes. Together with his good friend Dr. Watson (Jude Law), journey with them in the dark alleyways of 19th century London 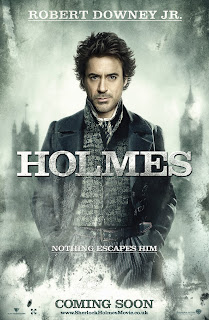 Movieland's latest Holmes/Watson double-act will sleuth their way onto their screens this Christmas in Sherlock Holmes and, judging by these rather elegant new character stills, they'll be cutting a dash while they do it.

Set against a fog-stained Westminster backdrop, the eye-catching posters show Robert Downey Jr.'s Holmes carrying on the debonair combination of style and six o'clock shadow familiar from the trailer (still no sign of a deerstalker), while Jude Law's Watson has gone seriously Saville Row in an awesomely Victorian three-piece. The cane - traditionally Holmes' weapon of choice - seems to fallen into the good doctor's possession. 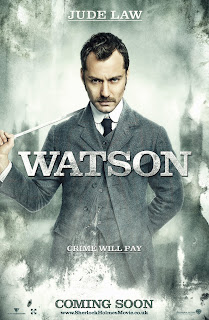 Holmes has traditionally spent a lot of time musing on cases from the velvetine comfort of 221B Baker Street, but Ritchie's reboot gets him out and about in the dark alleyways of 19th century London, meeting people and generally beating the hell of them. The sleuth, as they say, is out there.