Harry Potter and the Deathly Hallows – The Finale

“This is not the end. Harry Potter will continue to live in us." 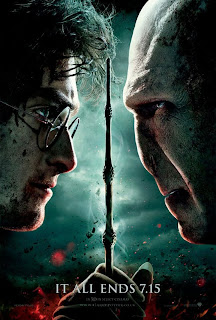 This year marks the ending of the Harry Potter movie series. It’s all bittersweet. I was excited to see the movie and sad at the same time that this is going to be the last. I have read the first four books since I was in high school (2001) and was so happy when I learned that they will start filming the book. It got all hyped up especially since it’s a 7 book series, meaning you will look forward to 7 films, but in this case, 8 films.
With 10 years in the making, the Harry Potter movie series didn’t fail me. For me, it even got better every year of Harry’s stay in Hogwarts. The last film, is the most anticipated of all, for it will put an end to everything about Harry’s life.
The movie is quite short (almost 2hours) for a finale, but for me all the important things and people in the last few chapters of the book is pretty much covered in the movie. It was truly enchanting. I especially like the Battle of Hogwarts and the Prince’s Tale part of the movie. I am happy as well that they showed the Epilogue, I was really excited for that. The musical score was just brilliant; it made me more intense and emotional in some parts of the movie. Watching Harry in the final film is a nostalgic moment for me, indeed no other motion picture series had ever followed a linear story surrounding the same characters over the course of eight full-length features.  Even for those who did not read the book, every character was loved. Like every book turned movie, not all could be taken into account in film, but I was glad that in HP and the Deathly Hallows Part 2, they covered the most essential parts of the story. The production is as great as the first movie and the actors are all consistent as with the first movie too.
Harry Potter has marked a name in the movie industry and even in our lives. Though the Harry Potter film series ended and epic battle won, he will still be remembered and his story will still be told for generations to generations. Harry and his story have thought us a lot of things. It has thought us courage to face our fears, forgiveness to our enemies, perseverance to achieve our goals, the value of friendship, and most especially the most powerful source of magic in the world, LOVE.
Indeed, there’s no other way to end the Harry Potter series than watching it in IMAX 3D.
Harry Potter and the Deathly Hallows Part 2 will be released in Philippine theatres and IMAX , in 3D and 2D beginning July 14, 2011. Proudly distributed by Warner Bros.
Posted by Cathie Alhambra