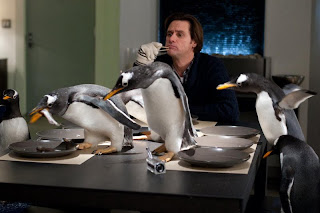 Jim Carrey stars as Thom Popper in the live-action comedy event whose chilly relationship with his family heats up after he inherits six adorable, lovable and mischievous penguins. Growing up in Brooklyn, New York, young Tommy Popper looks forward to the moments when, on his tiptoes to reach a ham radio in his bedroom, he can talk to his world-traveling father. Years later, Tommy is now Mr. Popper, a highly successful real estate developer in Manhattan. Amicably divorced from Amanda (Carla Gugino), with two children (Madeline Carroll and Maxwell Perry Cotton) he sees on alternate weekends, Mr. Popper lives the life of luxury in his ultra-modern Park Avenue apartment and is well on his way to becoming partner at his prestigious firm. That is, until the morning a final gift from Popper’s late father, a souvenir from Antarctica, arrives in a crate at Popper’s front door. 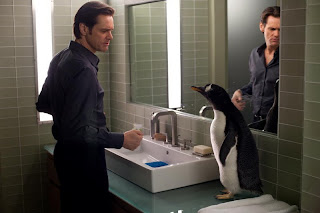 “Mr. Popper’s Penguins,” says Jim Carrey, is a movie that “stands out because it’s like nothing else out there. And I still get to be me, kind of crazy and fun and edgy.” Indeed, the film returns Carrey to the comedy style – and movie character – that catapulted him to global superstardom. And Carrey couldn’t be happier about it. “I wanted to do a movie that families are going to remember,” he explains. “Some people resist working with children and animals, for fear of being upstaged. But I love capturing the spark of innocence. And what is better than animals – penguins, in our case – and children to bring that out in us?” 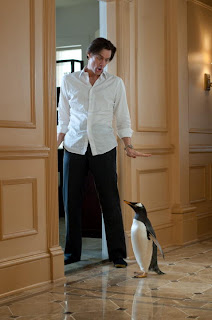 While casting the role of Mr. Popper, director Mark Waters and producer John Davis learned something rather surprising about Hollywood’s top talent. “I found out that actors and comedians love penguins,” Davis says. The producer found the perfect “Popper” combination of talents in Jim Carrey, the hugely successful star of such films as “The Truman Show,” “Ace Ventura: Pet Detective,” and “Bruce Almighty.” “Jim is a really talented physical comedian, but also an actor who’s able to generate a lot of heart,” Davis notes.

“Luckily, Jim read the script, and was immediately excited by it. And he’s also a huge lover of penguins,” says Waters. That’s putting it mildly. “These penguins are insanely beautiful,” Carrey exclaims. “They are incredible creatures. There are few animals that make you feel love – that strike that kind of chord. It’s really difficult to be unhappy about a penguin. That’s one of the reasons I did this movie. Penguins are a kind of obsession with me. They are puppies, times ten!”

“Working with Jim is incredibly illuminating and fun,” remembers Waters. “Jim is much more than a master of comedic invention; he also has a rare kind of emotional accessibility. When we’re working on emotional scenes, his ideas are just as good as his comedic ideas.”