I was able to watch the press screening of Hangover Part II and it was so great! I love how the movie slowly let's the viewers look for clues and look back as to what happened the night before the boys had their Hangover!

Warner Bros. Pictures’ “The Hangover Part II” woke up to staggering box office receipts as the blockbuster comedy grossed $205 million worldwide as of May 30, the fastest of any comedy to surpass $200-M benchmark.

The hit film is expected to continue its global success when it opens in the Philippines on June 8, arriving in cinemas in its original and uncut, R-18-rated version.


In the U.S., the Todd Phillips-directed comedy raked in more than $135 million dollars in its first five days in release, smashing multiple records along the way. “The Hangover Part II” broke the three-day, four-day and five-day opening records for a comedy film opening of any rating. Additionally, the film shattered both the Memorial Day weekend record and the Friday-to-Monday holiday record for an R-rated film, with a total of $103.5 million, more than doubling the previous records.

Dan Fellman, Warner Bros. Pictures President of Domestic Distribution, remarked, “We could not imagine a better way to kick off our summer and, based on audience reactions and strong word-of-mouth, we expect this ‘Hangover’ to last throughout the summer. Cheers to Todd Phillips and the ‘Wolfpack,’ who are back in a big way and who made ‘The Hangover Part II’ an experience no one will forget.”

In addition, “The Hangover Part II,” which was released in 40 territories topped the box office with $70.05 million on 5,193 screens through May 30.

President of International Distribution Veronika Kwan-Rubinek stated, “With the unprecedented success and continuing popularity of the first film, expectations were incredibly high for ‘The Hangover Part II.’ This fantastic opening shows that the movie not only met but exceeded those expectations on a global level. We applaud Todd, his fantastic cast, and everyone involved in the film, all of whom share in this extraordinary success.” 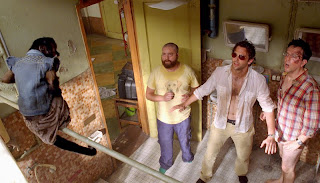 In “The Hangover Part II” Phil (Bradley Cooper), Stu (Ed Helms), Alan (Zach Galifianakis) and Doug (Justin Bartha) travel to exotic Thailand for Stu’s wedding. With the memory of Doug’s nearly disastrous bachelor party in Las Vegas still fresh—or at least well-documented—Stu is taking no chances. He has opted for a safe, subdued, pre-wedding trip brunch, with pancakes, coffee…and no alcohol. However, things don’t always go as planned. Two nights before the big day, at a fabulous resort in Thailand, Stu relents. One beer each. In sealed bottles. What could go wrong?

“The Hangover Part II” is director Todd Phillips’ follow-up to his 2009 smash hit “The Hangover,” which became the highest-grossing R-rated comedy of all time and also won the Golden Globe for Best Film – Comedy or Musical.