Reese and Penelope Gets STAR on the Hollywood Walk of Fame 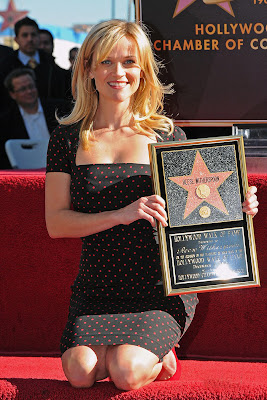 Reese Witherspoon joined the elite group of entertainers with a Star on the Hollywood Walk of Fame recently, and the Oscar winner revealed, "Never in 462 million years did I think this was going to happen to me. I thought I was going to live in Tennessee and be a doctor."

Witherspoon is one of Hollywood’s most sought after and respected actresses. She grew up in Tennessee, and returned to her roots to play June Carter Cash in the musical biopic, “Walk the Line.” Her performance earned her the 2005 Academy Award® for Best Actress, the BAFTA, the Golden Globe, the Screen Actors Guild Award, the New York Film Critics Award, and many other honors.

The 36-year-old Cruz wore a form-fitting purple tube dress just two months after giving birth to her son Leonardo, and was presented the award by Rob Marshall, director of “On Stranger Tides.” Cruz was accompanied in the ceremony by husband Javier Bardem and Johnny Depp, her co-star in the new installment of the “Pirates of the Caribbean” saga.
Posted by Cathie Alhambra