“‘Romeo and Juliet’ is one of the greatest love stories of all time,” says Elton John, who serves as executive producer and provides the music for Touchstone Pictures' new animated comedy “Gnomeo and Juliet.” “And garden gnomes are huge in many countries throughout the world. We thought this would be a really good idea.” 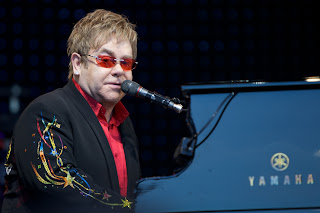 John, a singer, songwriter, musician and humanitarian, teamed up with longtime collaborator Bernie Taupin to provide the soundtrack for the film. “In describing the music, all I can say is that I had to reevaluate myself with any pop sensibilities still lurking in my decidedly un-pop brain,” says Taupin.
“Cue some old Beatles circa ‘Magical Mystery Tour’ and voila, that sounded like a good starting point. Gnomes are very poppy, wouldn’t you agree? Colorful, energetic and ABBAesque, so it seemed only natural that the songs suit the characters. Guess I just put my pointy hat on and went out into the garden.”

“Elton John and Bernie Taupin are geniuses,” says director Kelly Asbury. “They have written classics for the ages. And the opportunity to use that in the fabric of the movie was fantastic.” The John-Taupin team created all-new music for the film, including “Hello Hello,” a song created to illustrate the moment when Gnomeo meets and falls for Juliet.
“It’s our love-at-first-sight song,” says Asbury.These gnomes don’t sing, says the director. “We didn’t want it to be a traditional musical. But to use the music as song score really tied it together.” 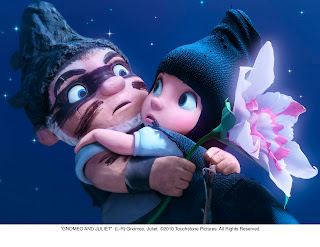 At the other end of the spectrum is “Love Builds a Garden.” Says Asbury, “‘Love Builds a Garden’ is Featherstone’s backstory song that teaches Gnomeo and Juliet a really big lesson about hate versus love and the power of love.”
“I think ‘Love Builds a Garden’ is the best song in the movie,” says John. “The flamingo explains to them that even though his garden is overgrown, it once flourished because the two people that lived there loved each other. Once they stopped loving each other, the garden died. But love can bring the garden back to life.”
Gnomeo and Juliet is now showing in Digital 3D and regular format and is distributed by Walt Disney Studios Motion Pictures International.
Posted by Cathie Alhambra