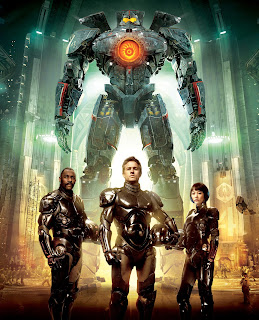 When legions of monstrous alien creatures, known as Kaiju, started rising from the sea, a war began that would take millions of lives and consume humanity’s resources for years on end.  To combat the giant Kaiju, a special type of weapon was devised: massive robots, called Jaegers, which are controlled simultaneously by two pilots whose minds are synched via a neural bridge, called “The Drift.”  But as the enemy grows more powerful with each attack, even the Jaegers are proving nearly defenseless in the face of the relentless Kaiju.


On the verge of defeat, the forces defending mankind have no choice but to turn to two unlikely heroes—a washed up former pilot (Charlie Hunnam) and an untested trainee (Rinko Kikuchi)—who are teamed to drive a seemingly obsolete Jaeger.  Together, they stand as mankind’s last hope against the mounting apocalypse.

It was months ago when I learned about this movie. I thought to myself, another violent film for robot and alien fans alike, and that includes Angel.

When I was invited to watch the premiere, it was Angel who's more excited than anyone else in the theater and he talks about it a lot. I was just "Okay". But after the movie, it was me who talks about the movie alot!

The movie showed not only epic battle scenes but also the becomings of a real hero. The intriguing premise of the sci-fi action adventure movie made it more interesting to watch. Imagine robots fighting off aliens. I'm not a geeky kind of person but the thought of apocalypse in our modern time is absurd yet something people would want to see and probably even anticipate. The epic battle scenes are really for me, heart racing scenes. The CGI are visually satisfying, its meant to be seen in IMAX.

The actors were not that internationally acclaimed but I like how well they acted of really thought of their roles specially Rinko and Charlie Day. You now know my favorite characters.

was once again gets a special mention in a international film, this time as the second city attacked by Kaijus. It's something to be proud of, don't you think?

I couldn't tell you more or else I will spoil everything. Watch it now in IMAX 3D for a superb movie experience.
Posted by Cathie Alhambra