Jude Law as Pitch in Rise of the Guardians

Jude Law is considered one of Britain’s finest actors, with a wealth and variety of film and theater performances to his credit. Law will star opposite Keira Knightley in Joe Wright’s “Anna Karenina.” Last year, he reunited with Guy Ritchie and Robert Downey Jr., on “Sherlock Holmes: A Game of Shadows,” reprising his role from the global boxoffice success “Sherlock Holmes”. 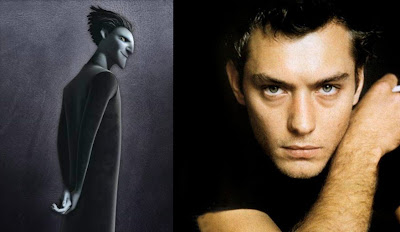 In his new animation film in DreamWorks Animations he plays evil entity known as Pitch. “The Guardians represent hope, joy, wonder and dreams,” producer Christina Steinberg notes. “If Pitch is able to take them out, they will literally cease to exist. The attributes they represent would be gone from the world and fear would reign.” The way Pitch attempts to do that is by corrupting one of the Guardians’ tools.

“He has a huge amount resentment for being shoved under the beds for hundreds of years,” says actor Jude Law, who gives voice to Pitch. “He figures out a way to take the Sandman’s dream sand – the positive, pure golden sand that gives everyone happy dreams – and twist it into nightmares (which take the form of amorphous black stallions subject to Pitch’s command), creating fear within children.” 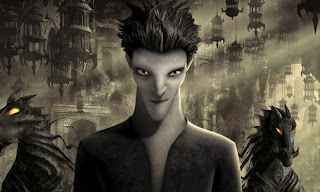 And by design, the manner in which he operates is quite compelling, director Peter Ramsey says. “We thought a lot about the way fear works in the real world, and the logic behind it. If you think, ‘I want to go outside, but there are some clouds in the sky and that means it might rain. If it rains, I might get a cold. If I get a cold…’ Pretty soon you’re not going outside and you’re missing all the best stuff in life because you let your fear snowball into something unhealthy. Fear shuts down your world. So we knew that we wanted a character that was alluring and could falsely convince you that being afraid was the only thing that made sense.” 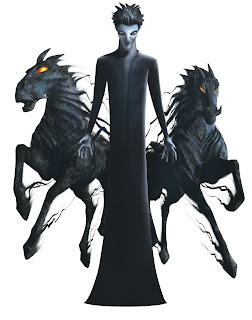 Steinberg agrees. “These iconic characters needed a worthy opponent. Peter, Bill Joyce, David Lindsay-Abaire and I spent a lot of time talking about our favorite villains in past movies. We all loved the feeling we had watching ‘The Wizard of Oz’ when we hid behind our bedroom doors, peeking our heads out to watch the Wicked Witch of the West. She was scary, but exciting and charismatic at the same time. We wanted to bring that dynamic to Pitch as well. So, he’s not a terrifying, moustache twirling villain. He has a lot of personality. He’s wicked, funny and smart.”

Lindsay-Abaire adds, “There’s a human side to Pitch, as well. Like our hero, Jack Frost, Pitch is a lonely soul who simply wants to be believed in. Unfortunately, he thinks the way to make that happen is through fear and intimidation.”

“When Jude Law’s name came up for the role, everybody’s bells just went off,” Ramsey says.

“We listened to his voice in combination with some animated tests and we knew we had the right casting. Pitch moves through shadows. He moves on the edges of what you can see. Jude’s voice has this beautiful quality to it – we call it ‘the velvet touch of Pitch’ – and you just want to listen to it forever even when it’s telling you these terrible things. “Pitch’s story is pretty compelling,” Ramsey continues. 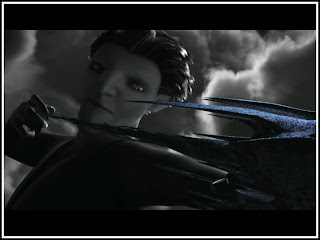 “He’s a guy who’s been on the bottom for a long time and who has now found a way to strike back and take power for himself. Jude has been able to flesh out the nuances of this character’s many layers. It’s a magnificent thing to listen to – the hair literally stands up on the back of your neck.”

“The voice casting was, no pun intended, pitch perfect,” executive producer Guillermo del Toro says. “Jude brings fragility, refinement, intelligence and cunning – a lot of stuff that is beyond the lines – to his character. There’s a sense of isolation and loneliness in Pitch that is all Jude’s doing.”

‘Rise of The Guardians’ is released and distributed by United Intl. Pictures through Solar Entertainment . Corp.
Posted by Cathie Alhambra