20TH Century Fox releases the latest international trailer of “EPIC” from Chris Wedge based on the book by William Joyce “The Leaf Men and the Brave Good Bugs.” 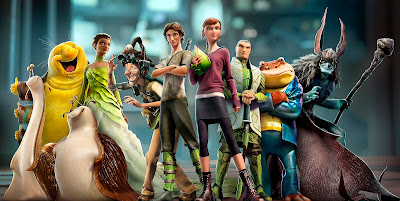 From Blue Sky Studios, the studio that continues to raise the bar in 3D animation and makers of the phenomenal “Ice Age” and “Rio” films, Chris Wedge directs and creates another world in “EPIC” unlike any other that we’ve seen before. Watch the trailer here.

The action, adventure-filled animation tells of funny fantastical characters who come together to become heroes to protect a hidden lush forest. Using the latest in photo real animation, “EPIC” tells the story of an ongoing battle deep in the forest between the forces of good and the forces of evil. When a teenage girl named Mary Katherine played by Amanda Seyfried finds herself magically transported into this secret universe, she must band together with a rag-tag team of fun and whimsical characters in order to save their world (and ours) from the evil spider Queen Tara played by Beyonce Knowles.

“EPIC” opens May 24 in theaters across the Philippines from 20th Century Fox to be distributed by Warner Bros. Like us on Facebook 20th Century Fox (Philippines) and 20thCenturyFoxPh at YouTube for more trailers, photos and announcements.
Posted by Cathie Alhambra