Moving Tale on Family Dysfunction in "Trouble with the Curve" 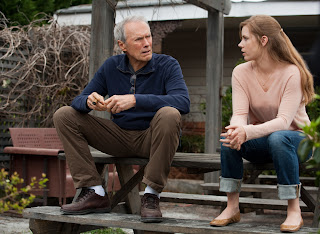 In the film, Gus Lobel (Eastwood) has been one of the best scouts in baseball for decades, but, despite his efforts to hide it, age is starting to catch up with him. Nevertheless, Gus—who can tell a pitch just by the crack of the bat—refuses to be benched for what could be the final innings of his career. He may not have a choice. The front office of the Atlanta Braves is starting to question his judgment, especially with the country’s hottest batting phenom on deck for the draft. The one person who might be able to help is also the one person Gus would never ask: his daughter, Mickey (Adams), an associate at a high-powered Atlanta law firm whose drive and ambition has put her on the fast track to becoming partner. Mickey has never been close to her father, who was ill-equipped to be a single parent after the death of his wife. Even now, in the rare moments they share, he is too easily distracted by what Mickey assumes is his first love: the game.


Against her better judgment, and over Gus’s objections, Mickey joins him on his latest scouting trip to North Carolina, jeopardizing her own career to save his. Forced to spend time together for the first time in years, each makes new discoveries—revealing long-held truths about their past and present that could change their future. 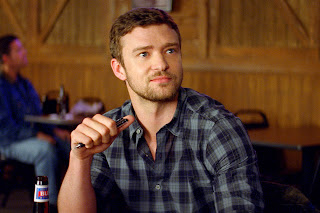 Timberlake is Johnny Flanagan, a rival scout who has his sights on a career in the announcer’s booth…and has eyes for Mickey. The main cast also includes John Goodman as Gus’s old friend and boss, Pete Klein, and Matthew Lillard as Phillip Sanderson, the Braves’ associate director of scouting. “

‘Trouble with the Curve’ is a story about how we deal with what life throws at us,” describes director/producer Robert Lorenz. “It has characters in whom we can all see a bit of ourselves, reaching those moments in life when we are faced with re-evaluating priorities: the importance we put on our careers, our friendships and our family.” 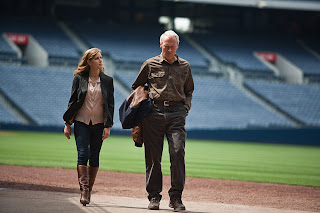 At the center of the story are a father and daughter whose lives have taken them in opposite directions. Even when they’re together, they are worlds apart. But now, circumstances are forcing them to face their differences on common ground.

“In any family, even when things get tough, there are always ties that connect you,” says the film’s star and producer Clint Eastwood. “You just have to find a starting point to begin to close the gap.”