Meet the Stars of MONTE CARLO 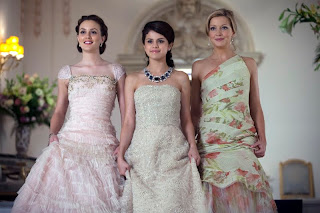 “Monte Carlo” opens us to freshly minted high school grad Grace (Selena Gomez) and best friend Emma (Katie Cassidy) jettisoning their waitress jobs in Texas for a trip to Paris.  But Grace’s killjoy stepsister Meg (Leighton Meester) is involuntarily installed as chaperone by Grace’s parents. Meanwhile, Emma’s boyfriend, Owen (Cory Monteith), is trying to put the kibosh on the trip altogether with a ring and proposal.

Best known for playing Finn Hudson in the popular Fox series “Glee,” Cory Monteith stars with today’s teen icon Selena Gomez in “Monte Carlo,” along with “Gossip Girl’s” Leighton Meester and Katie Cassidy.
Q. What’s your character like?
A. Owen is completely in love with Katie Cassidy’s character, Emma. He’s on a journey - and he’s chasing her acrossEurope so he can take her home again and marry her. He can be a little misguided, but he’s incredibly romantic and prepared to do whatever it takes to win back his girl.
Q. Describe your dream girl.
A. People who are passionate are attractive - if they’re excited about their life and what they’re doing, that’s really engaging. It doesn’t matter whether they’re a movie star or an accountant. As far as looks go, I don’t have any specifics. I don’t have a preference for blondes or brunettes.
Q. What will you miss most about Monte Carlo when you’ve finished filming?
A. The bread! The bread is delicious, I can get through a lot of that stuff. The way people treat each other here is very different too. There’s a kind of old world sensibility in Europe - people are refined and respectful and it’s very cool. In North America there’s a different attitude. Everything is faster and less personal.

‘Gossip Girl’ star Leighton Meester takes us on a trip out with the girls en route to Europe in the romantic comedy “Monte Carlo” with Selena Gomez, Katie Cassidy and Cory Monteith (Glee).
Q. You play Meg, Grace’s stepsister. What’s that character like?
A. Meg starts off very differently from the way she ends up. She’s kind of a dork, and she’s a little bit uptight. She recently lost her mother, which is a really difficult thing to go through and Meg’s finding it hard. Meg only goes on trip because her father pretty much forces her to.
Q. What was the hardest scene to film?
A. Honestly, the only hard part has been the long days and the early starts. Everything else has been fun. When we were in Paris we had to start filming at 3AM so we could shoot on the EiffelTower when no one else was there. So although getting up that day was hard, having the whole of the Eiffel Tower to ourselves was an incredible experience! We also got to be in the Louvre by ourselves, which was amazing
Q. How do Meg’s outfits compare to those of the other characters you’ve played?
A.  Honestly, I don’t think it matters if a character has high end or low end clothes as long as you feel like they’re definitely a part of that character’s wardrobe. In the film we’re all whisked away to Monte Carlo by accident, and we don’t get to bring many clothes with us. I’m in the same outfit for most of the film. There’s a fabulous gown I get to wear at the end. It’s beautiful, but it’s couture and really heavy. When we started filming the scene, I was so excited to wear it, but by the end my body was aching so much I would have been happy never to see it again!

Teen superstar and Bieber’s babe Selena Gomez stars in the romantic comedy “Monte Carlo” co-starring Leighton Meester, Katie Cassidy and Cory Monteith.  The movie revolves three American girls who take a trip to Paris and get caught up in a case of mistaken identity, based on the Jules Bass novel “Headhunters” and directed by Thomas Bezucha.
Q. Do you have anything in common with your character?
A. Like Grace, I grew up in a small town, and I was determined to branch out and do something that I love. Being at home is wonderful, but I think you need to be prepared to push yourself out of your comfort zone and explore all your options if you’re going to achieve your dreams. I think that’s something that I share with Grace.
Q. What was the most challenging part of making the film?
A. This is by far the hardest job I’ve ever taken on. Because I graduated this year, this is the first project I’ve been able to work on as an adult. It means working 17 hour days, which can be quite intense! It’s also been one of the most fun projects I’ve ever worked on. Monte Carlo is a beautiful place to work, and I’ve got some amazing people around me - Cory’s so much fun, and Leighton is like a big sister! They make me feel relaxed and carefree.
Q. Has working on Monte Carlo inspired any of your songwriting?
A. We shot a lot of the movie in Budapest, and I recorded half of my album while I was there. I wrote a song called Ready, Steady Go, which is about how it feels to move to a different country and all the anxieties I had about going. I was terrified, but I was surrounded by people who helped and supported me. The whole theme is about following your heart and finding yourself.
Posted by Cathie Alhambra