CULVER CITY, Calif.,/BRUSSELS, Belgium, June 25, 2011 – Today, in honor of Global Smurfs Day, Smurfs fans in 11 cities around the world set a new Guinness World Records title for the Largest Gathering of People Dressed as Smurfs within a 24-hour Period in Multiple Venues, it was announced today by Marc Weinstock, president, Worldwide Marketing for Sony Pictures Entertainment. The worldwide events were organized by Sony Pictures Entertainment and Sony Pictures Animation in anticipation of the release of The Smurfs® (opening in the Philippines on August 10.) 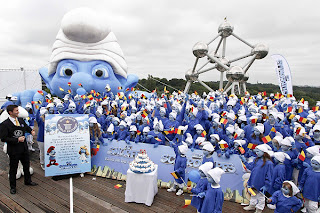 As worldwide audiences turned out to celebrate the birthday of Peyo, the creator of the Smurfs, fans came to events dressed as Smurfs (white Smurf hat, white pants and shoes, and body painted blue). Adjudicators from Guinness World Records confirmed that a total of 4,891 people dressed as Smurfs in 11 locations simultaneously around the world, claiming a new title for Largest Gathering of People Dressed as Smurfs within a 24-hour Period in Multiple Venues. The previous record had been 2,510 people dressed as Smurfs. 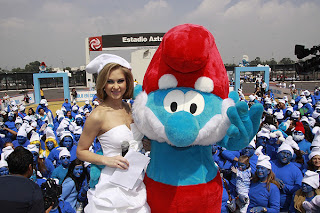 Commenting on the announcement, Weinstock said, “It’s a thrill to see so many people turn out to be a part of this true fan moment in Smurfs history. Breaking a Guinness World Record on Global Smurfs Day is a testament to the enormous appeal and popularity of these beloved characters.” Aleksandr Vypirailenko, Guinness World Records Adjudicator, added, “We are impressed by the level of coordination and timing required to pull off this truly global record attempt. With 11 cities, each with hundreds of people dressed as Smurfs – and it all happened simultaneously. We apply the same strict rules and exacting approach to every record that we recognize, and it’s exciting to see that this record was not simply broken, but smashed.”

In addition, people around the world observed Global Smurfs Day, from lit monuments in Brazil to a fun-filled family event at the Tivoli Gardens in Copenhagen. In France, Smurf figurines inhabited Paris’s garden of the Champs de Mars (in front of the Eiffel Tower). 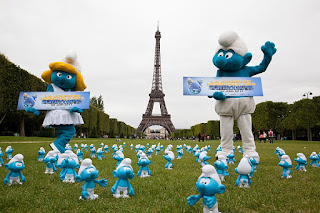 In the Philippines, Global Smurfs Day was celebrated with festivities for the family at the SM Mall of Asia in an afternoon of fun games, wacky snaps at the BaiCapture photo booth, tattoo painting and free blue cotton candy.

The Smurfs make their first 3D trip to the big screen in Columbia Pictures/Sony Pictures Animation’s hybrid live-action and animated family comedy, The Smurfs. When the evil wizard Gargamel chases the Smurfs out of their village, through a magical portal, and into our world, they land in the middle of New York’s Central Park. Just three apples high and stuck in the Big Apple, the Smurfs must find a way to get back to their village before Gargamel tracks them down.