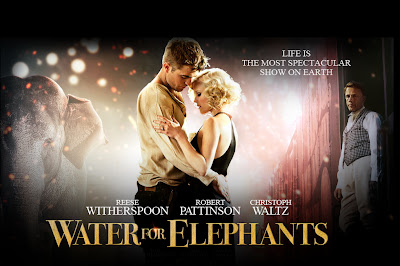 Life is the most spectacular show on Earth. You make your own story, you make it happen. Along with that, you choose that people that will play a very important part of your life. You decide which path to take, which train to ride, which food to eat and which people to love. And whatever happens at the end of the show, you have nothing but yourself to blame or to praise.
Water for Elephants is a based from the Sara Gruen's book by the same name. I have read the summary of the book and I am happy with the parts shown in the film. I feel that the movie presented the important parts. The story revolved around Jacob Jankowksi (Pattinson), a young man whose parents died in a car accident and is forced to live by himself. Fate brought him then to a circus train owned by August (Waltz), met Marlena (Witherspoon) and then his life is changed forever. I love the story, it's very moving and emotional. It's good also to produce movies like this, I can't remember the last time I even went to a circus.

Robert Pattinson fans should be proud. Robert's acting is far way better that he did in HP and Twilight. He was a totally different person as Jacob. Reese nevel fails to elude audience with her charm, may she be single or married in a film. Her natural elegance and beauty is a perfect distraction for Robert in the film and she's a the perfect Marlena. Waltz on the other hand, played his part very well. His wildly unpredictable character is the perfect enemy in the movie. I like how the movie started, the narration of Jacob is already as moving as his story. The Circus Show is a bit short though, I would have wanted to see more of the spectacular show. The ending is a hopeful triumph of being finally home for Jacob.
“Water for Elephants” opens May 4 in theaters from 20th Century Fox to be distributed by Warner Bros.
Posted by Cathie Alhambra