Pirates of the Caribbean: On Stranger Tides and CARS 2 on IMAX

Ever since I saw the trailer of Pirates of the Caribbean, I have been anxiously waiting for the film to be released and upon knowing that it will be in IMAX, It made me ever more excited!  Kids will also be happy to know that CARS 2 will be on IMAX this year too!
PRESS RELEASE
IMAX Corporation and The Walt Disney Studios recently announced a new agreement to release two additional 3D pictures to IMAX theatres in 2011. The titles included are “Pirates of the Caribbean: On Stranger Tides,” starring Johnny Depp and Penélope Cruz, slated for release in the Philippines on May 20 and “Cars 2” on August 24. 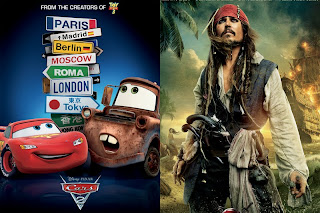 The expanded partnership between IMAX and Disney will bring some of the Studio's most highly anticipated theatrical releases in 2011 and beyond to IMAX venues around the world. Each title will be digitally re-mastered into the unparalleled image and sound quality of The IMAX 3D Experience.
Commenting on the announcement, Chuck Viane, president of distribution, Walt Disney Studios Motion Pictures said, "The incredible performance of our IMAX releases in 2009 and 2010 demonstrated that the combination of IMAX and Disney resonates with moviegoers worldwide. We're very much looking forward to continuing this great partnership through 2011 with an incredible slate of exciting films. The IMAX Experience adds another level of impact and excitement to a movie, and with these new films, made by some of the industry's most innovative filmmakers, audiences are in for are real treat."
"Our long-standing partnership with The Walt Disney Studios has resulted in extraordinary movie experiences for audiences, and we're very excited to add these upcoming Disney films to our slate for 2011," said IMAX CEO Richard L. Gelfond. "The growing network of digital IMAX locations continues to enable our studio partners to increase the number of films they release in IMAX, ensuring moviegoers have more opportunities to experience the films they want to see in the best possible way."
"These films are ideal additions to our slate, and we're excited to combine the power of the Disney and IMAX brands with two iconic movie franchises as well as continuing our long standing partnership with Bob Zemeckis," said Greg Foster, Chairman and President of IMAX Filmed Entertainment. "Disney's commitment to 3D and its partnership with IMAX has helped to transform the way people see movies, and we're thrilled to keep the momentum going."
Produced by Jerry Bruckheimer and directed by Rob Marshall, “Pirates of the Caribbean: On Stranger Tides” captures the fun, adventure and humor that ignited the hit franchise—this time in Disney Digital 3D™. Captain Jack Sparrow (Depp) finds himself on an unexpected journey to the fabled Fountain of Youth when a woman from his past (Cruz) forces him aboard the “Queen Anne’s Revenge,” the ship of the formidable pirate Blackbeard (Ian McShane).
Meanwhile, “Cars 2” is directed by John Lasseter and stars Owen Wilson and Michael Caine. When star racecar Lightning McQueen (voice of Wilson) and the incomparable tow truck Mater (voice of Larry the Cable Guy) head overseas to compete in the first-ever World Grand Prix, Mater gets caught up in an intriguing adventure of his own: international espionage.
Posted by Cathie Alhambra

Email ThisBlogThis!Share to TwitterShare to FacebookShare to Pinterest
Labels: Cars 2, IMAX 3D, Pirates of the Caribbean: On Stranger Tides