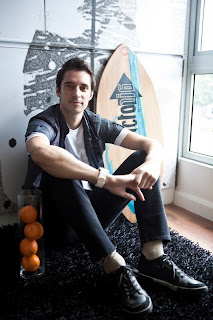 Orange Magazine TV's April 2011 cover is none other than the French singer with a Pinoy heart, Julien Drolon.
Singer, songwriter, and former International Reporter are all words that can be used to describe Julien Drolon, but they merely scratch the surface. Drolon (born in Nantes, France on the 5th of February 1982) is on a mission to promote peace thru his love for music. He first arrived in the Philippines last 2007 and came back at the end of 2009 and decided to start his musical career.
This French singer with a Pinoy heart describe his music style as feel good music which combines pop, reggae, funk, and rock. He considers Jason Mraz, Bob Marley, Jamiroquai, Donovan Frankenreiter, Patrice and Asa as his musical influences. Drolon performs on stage with his equally-talented Filipino band composed of Girlie Capulso (back up vocals), Enzo Queyquep (lead guitar), Joseph Duenas (bass), Leal Nanca (keyboard) and Joven Palencia (Drums). 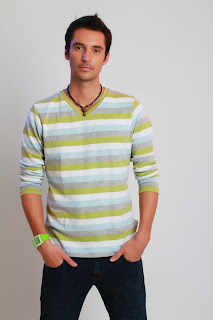 Drolon already played in Hong Kong and mainland China, at an Asian music conference, Music Matters Festival, which was held in Hong Kong last May 26-29, 2010. He also performed for the opening of the China Music Industry Park in Shanghai last July, 2010.

Addressing the issue of why he started his career in the Philippines, he responded, “It’s a place that is blessed with amazing musicians that want to collaborate on the making of my album and Filipinos are music lovers”. For his first album, Drolon is working with producers Jack Rufo and Angee Rozul. 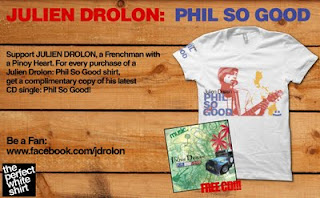 Julien Drolon's debut album entitled “JULIEN DROLON… PHIL SO GOOD” is due for mainstream release in May 2011, followed by a series of tour in the Philippines. Check out more updates on Julien Drolon at www.facebook.com/jdrolon,www.myspace.com/juliendrolon and www.twitter.com/juliendrolon12
Posted by Cathie Alhambra