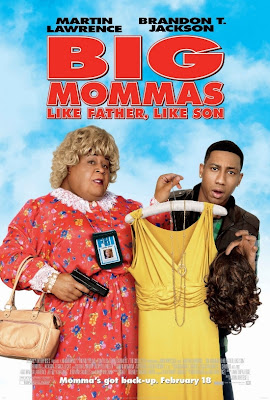 Big Momma is back and this time he has big backup: his teenage stepson Trent.  Martin Lawrence returns as FBI agent Malcolm Turner and as Turner’s deep-cover alter-ego Big Momma. Turner is joined by Trent (Jackson) as they go undercover at an all-girls performing arts school after Trent witnesses a murder.  Posing as Big Momma and as hefty coed Charmaine, they must find the killer before he finds them.

The Malcolm-Trent dynamic is central to the series’ new direction.  As the film opens, Malcolm is thrilled when graduating high school student Trent is accepted to Duke University.  But Trent has other ideas; he wants to pursue a career as a rapper.  That conflict ultimately leads Trent to take a detour into the family business: going undercover by dressing up as a woman.   Trent joining Malcolm as a Big Momma and their ensuing generational battles not only double the comedy, they add an emotional resonance because Malcolm must come to terms with Trent’s desire to follow his dreams, even as Malcolm goes to extreme lengths to keep Trent safe. “I love playing Big Momma,” saysLawrence, “but it was really the energy of the script and having Brandon as my partner in the story that brought me back.  Malcolm looks at Trent as a son but Trent is becoming a man and wants to do his own thing.  Everyone can relate to that.”
Jackson says being cast as Trent/Charmaine was a dream come true. “Martin Lawrence is one of my idols and it was exciting to work with him,” says the young star, who had standout roles in “Tropic Thunder” and “Percy Jackson & the Olympians: The Lightning Thief.”  “And when it came to wearing the [weighty prosthetics, as Charmaine], Martin gave me some good advice: ‘Sit down whenever you can, chill out, and have a good time.’ It’s my nature to run around the set and talk to everybody, so the suit made me focus on my performance.”
Trent, says Jackson, is “your average teenager who knows exactly what he wants to be; in his case, it’s a successful rapper.  He also sees himself as a ladies’ man, but it’s tough to be a ladies’ man in a woman’s body! So he undergoes all these dynamics of learning about women – and about himself.”
Jackson adds that his biggest challenge was making sure Trent could “shine through” the formidable prosthetics that transform the character into Charmaine.  Trent’s learning curve in acting like a woman is a steep one, made exponentially more difficult because he’s also trying to woo one of his fellow students, Haley (Jessica Lucas), a beautiful singer and composer.  As himself, the cocky and clueless Trent struck out with Haley.  But as Charmaine, he’s getting a unique perspective on dealing with the opposite sex – and he becomes a better man in the process.
“Big Momma’s: Like Father, Like Son” is Now Showing in theaters from 20th Century Fox to be distributed by Warner Bros.
Posted by Cathie Alhambra