I sped through the 3KM run! That's what the back dropped says. Haha! 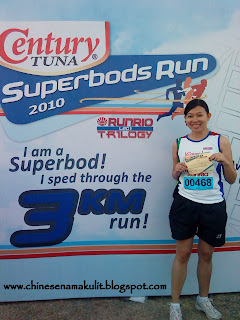 Just this morning a lot of people joined "The Run of the Century". This event includes not only runners and fitness enthusiasts but also top celebrities like Derek Ramsey, Rian Ramos, Jon Avila, Rafael Rosel, Iza Calzado and many more.

Century Tuna, the country’s leading canned tuna brand, leads the way to health by encouraging more people to be part of this year’s biggest celebration of health and fitness. And through events like the Superbods Run, Century Tuna is bringing the concept of living healthy within easy reach of more people. Century Tuna has joined forces with the country’s top running coach, Rio de la Cruz of RunRio, to mount the most exciting running event of the year. As the first leg of the RunRio Trilogy, the Superbods Run features heart-pounding race events and fun-filled activities that are sure to inspire everyone to move towards a healthy lifestyle.

The Superbods Run is more than just a race as runners enjoyed race packs and loot bags with free Century Tuna products and other treats such as Nature Valley energy bars. Besides from the runners that enjoyed the race and freebies, UNICEF and WWF will also get donations for every label dropped , as the event's fundraising activity was supported too. Century Tuna will have a raffle-for-a-cause, where participants who present as many Century Tuna labels at the drop-off areas at registration venues and at the event itself get a chance to win big prizes.

It was indeed a whole morning of fun and healthy lifestyle!